I have never heard the story of Micah preached from the pulpit. And I must’ve been half asleep when I read it from my Bible in the past but today I was like a new Christian getting that great feeling of discovery. The story of Micah was vivid this morning. He lived when Israel had no judge or king. His idea of worshipping God was off kilter but he had a reverence for God. His story begins in Judges 17 which I have put in this blog and continues on in Judges 18. I just don’t have time this morning to tell the interesting second part. So, just read it for yourself. 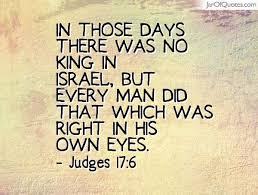 1There was a man named Micah, who lived in the hill country of Ephraim.2 One day he said to his mother, “I heard you place a curse on the person who stole 1,100 pieces[a] of silver from you. Well, I have the money. I was the one who took it.”

“The Lord bless you for admitting it,” his mother replied. 3 He returned the money to her, and she said, “I now dedicate these silver coins to the Lord. In honor of my son, I will have an image carved and an idol cast.”

4 So when he returned the money to his mother, she took 200 silver coins and gave them to a silversmith, who made them into an image and an idol. And these were placed in Micah’s house.5 Micah set up a shrine for the idol, and he made a sacred ephod and some household idols. Then he installed one of his sons as his personal priest.

6 In those days Israel had no king; all the people did whatever seemed right in their own eyes.

7 One day a young Levite, who had been living in Bethlehem in Judah, arrived in that area. 8 He had left Bethlehem in search of another place to live, and as he traveled, he came to the hill country of Ephraim. He happened to stop at Micah’s house as he was traveling through. 9 “Where are you from?” Micah asked him.

He replied, “I am a Levite from Bethlehem in Judah, and I am looking for a place to live.”

10 “Stay here with me,” Micah said, “and you can be a father and priest to me. I will give you ten pieces of silver[b]a year, plus a change of clothes and your food.” 11 The Levite agreed to this, and the young man became like one of Micah’s sons.

12 So Micah installed the Levite as his personal priest, and he lived in Micah’s house. 13 “I know the Lord will bless me now,” Micah said, “because I have a Levite serving as my priest.”