Out of all the Bible, there is one part that I dread to read the most. It’s even worse  than the story when King David fell from honor and committed adultery then murder.

The story comes from the last three chapters in the book of Judges. It centers around an incident in which a man’s concubine was brutally raped to death and then the man cut up her up in twelve pieces and delivered the parts to each of the tribes of Israel. This caused all the other tribes to fight against the man’s tribe, Benjamin. Civil war broke out in the Promised Land.

In that day, there was no king or judge over all of Israel. The Israelites came together against the tribe of  Benjamin and sought God about the situation and God heard their cry. They had to destroy the tribe because of its great sin. Then the Israelites were sad that one of the tribes had been destroyed. Only a few remained. The Israelites had also made a vow to God. They would not provide wives for the few remaining men so that they could repopulate. But in the end, a way was made so the vow was kept and the men got wives. 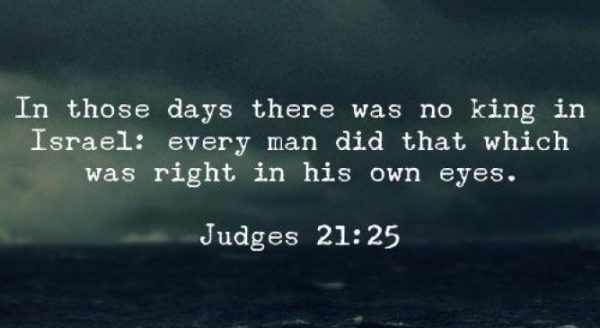 22 While they were enjoying themselves, a crowd of troublemakers from the town surrounded the house. They began beating at the door and shouting to the old man, “Bring out the man who is staying with you so we can have sex with him.”

23 The old man stepped outside to talk to them. “No, my brothers, don’t do such an evil thing. For this man is a guest in my house, and such a thing would be shameful. 24 Here, take my virgin daughter and this man’s concubine. I will bring them out to you, and you can abuse them and do whatever you like. But don’t do such a shameful thing to this man.”

25 But they wouldn’t listen to him. So the Levite took hold of his concubine and pushed her out the door. The men of the town abused her all night, taking turns raping her until morning. Finally, at dawn they let her go. 26 At daybreak the woman returned to the house where her husband was staying. She collapsed at the door of the house and lay there until it was light.

27 When her husband opened the door to leave, there lay his concubine with her hands on the threshold. 28 He said, “Get up! Let’s go!” But there was no answer.[d] So he put her body on his donkey and took her home.

29 When he got home, he took a knife and cut his concubine’s body into twelve pieces. Then he sent one piece to each tribe throughout all the territory of Israel.

46 So that day the tribe of Benjamin lost 25,000 strong warriors armed with swords, 47 leaving only 600 men who escaped to the rock of Rimmon, where they lived for four months. 48 And the Israelites returned and slaughtered every living thing in all the towns—the people, the livestock, and everything they found. They also burned down all the towns they came to.

One thought on “Civil War”