Words impact. Jesus has all power and authority.

In the book of Luke, Jesus was brought to trial and the elders and leaders asked Him if He was the Messiah. Then Jesus told them from now on the Son of man would be seated in the place of power at God’s righthand. Then Jesus replied to their question, “You say that I am.” After that Jesus went to Pilate and he asked if Jesus was the King of the Jews and Jesus replied,”You have said it.”

I believe Jesus was steering those who questioned Him to confess Him as Lord. And until today, I never noticed that Jesus said from that moment on He was seated at the righthand of God. It seems logical that Jesus would have said that after His victory over death. But I trust God and rest in what He proclaimed in that moment. It just revealed more of His power. 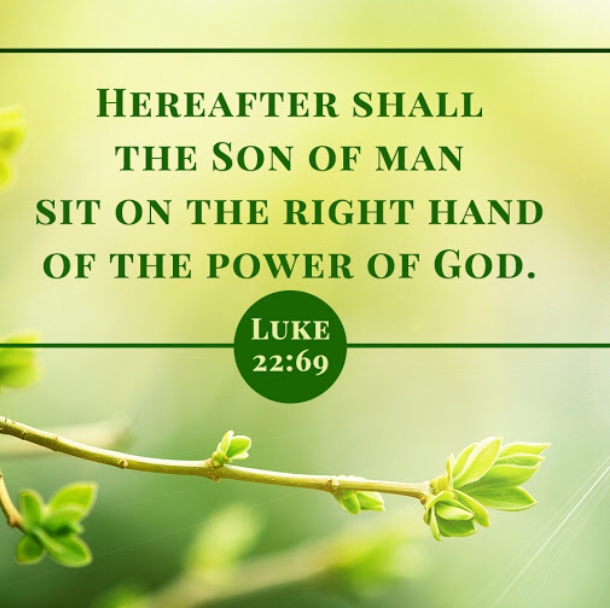 66 At daybreak all the elders of the people assembled, including the leading priests and the teachers of religious law. Jesus was led before this high council,[f] 67 and they said, “Tell us, are you the Messiah?”

But he replied, “If I tell you, you won’t believe me. 68 And if I ask you a question, you won’t answer. 69 But from now on the Son of Man will be seated in the place of power at God’s right hand.[g]”

71 “Why do we need other witnesses?” they said. “We ourselves heard him say it.”

1Then the entire council took Jesus to Pilate, the Roman governor. 2 They began to state their case: “This man has been leading our people astray by telling them not to pay their taxes to the Roman government and by claiming he is the Messiah, a king.”

3 So Pilate asked him, “Are you the king of the Jews?”

Jesus replied, “You have said it.”

4 Pilate turned to the leading priests and to the crowd and said, “I find nothing wrong with this man!”

5 Then they became insistent. “But he is causing riots by his teaching wherever he goes—all over Judea, from Galilee to Jerusalem!”

6 “Oh, is he a Galilean?” Pilate asked.7 When they said that he was, Pilate sent him to Herod Antipas, because Galilee was under Herod’s jurisdiction, and Herod happened to be in Jerusalem at the time.

8 Herod was delighted at the opportunity to see Jesus, because he had heard about him and had been hoping for a long time to see him perform a miracle. 9 He asked Jesus question after question, but Jesus refused to answer. 10 Meanwhile, the leading priests and the teachers of religious law stood there shouting their accusations. 11 Then Herod and his soldiers began mocking and ridiculing Jesus. Finally, they put a royal robe on him and sent him back to Pilate.12 (Herod and Pilate, who had been enemies before, became friends that day.)