I found an interesting detail about when Peter denied Jesus three times. After the third time, a rooster crowed. Here’s the detail, roosters are known to crow early at the beginning of day. God’s mercies are new every morning. Peter sinned and denied Jesus and then God’s mercy took over. That’s a great example of how much God loves us and how much He is eager to forgive so we can start brand new.

Jeremiah wrote the Old Testament book of Lamentations because God was greatly saddened by the continuous sin of His people, the Israelites. But in Peters story, he turned his failure into a success story for God. A great verse from Lamentations can be applied to Peter and to our lives every day! 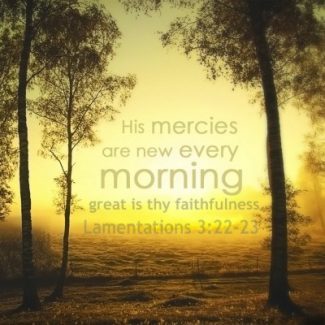 54 So they arrested him and led him to the high priest’s home. And Peter followed at a distance. 55 The guards lit a fire in the middle of the courtyard and sat around it, and Peter joined them there. 56 A servant girl noticed him in the firelight and began staring at him. Finally she said, “This man was one of Jesus’ followers!”

58 After a while someone else looked at him and said, “You must be one of them!”

59 About an hour later someone else insisted, “This must be one of them, because he is a Galilean, too.”

60 But Peter said, “Man, I don’t know what you are talking about.” And immediately, while he was still speaking, the rooster crowed.

61 At that moment the Lord turned and looked at Peter. Suddenly, the Lord’s words flashed through Peter’s mind: “Before the rooster crows tomorrow morning, you will deny three times that you even know me.” 62 And Peter left the courtyard, weeping bitterly.