The descendents of Joseph needed more of the Promised Land because there were so many of them. Joshua told them they could have more land but they had to go clear it out. Their mindset was, the people in the land were too strong for them because they had iron chariots. (This was the same negative attitude most of the Israelites had when they scouted out the land in the beginning. Joshua, their fearless leader, went ahead and gave them the land and told them they would go in and take it even though the inhabitants were strong. 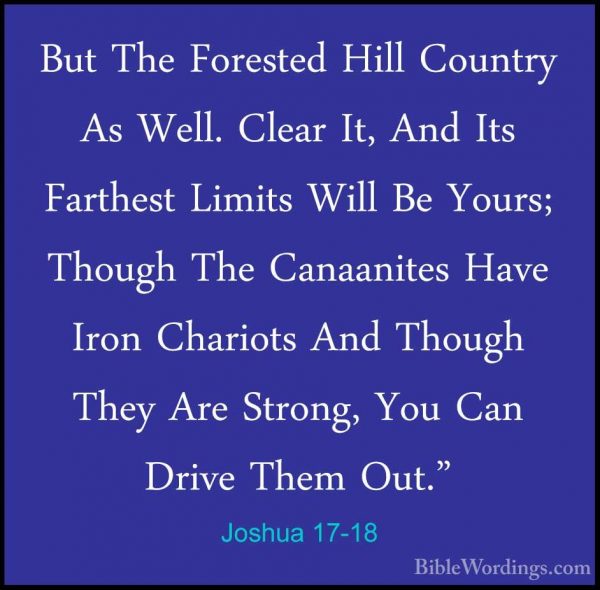 15 Joshua replied, “If there are so many of you, and if the hill country of Ephraim is not large enough for you, clear out land for yourselves in the forest where the Perizzites and Rephaites live.”

16 The descendants of Joseph responded, “It’s true that the hill country is not large enough for us. But all the Canaanites in the lowlands have iron chariots, both those in Beth-shan and its surrounding settlements and those in the valley of Jezreel. They are too strong for us.”

17 Then Joshua said to the tribes of Ephraim and Manasseh, the descendants of Joseph, “Since you are so large and strong, you will be given more than one portion. 18 The forests of the hill country will be yours as well. Clear as much of the land as you wish, and take possession of its farthest corners. And you will drive out the Canaanites from the valleys, too, even though they are strong and have iron chariots.”