Zaccheaus was a rich tax collector who wanted to meet Jesus. When I was young I learned the lighthearted kid song that talked about Zaccheaus being short. That song did not do justice to the meaning of this Bible story.

Jesus told Zaccheaus He would come to his house on that day. It sounds rude, that out of the blue, Jesus says I will visit your house today but Jesus already knew Zaccheaus’ heart. The people gossiped because Zaccheaus had a bad reputation as a tax collector. But Jesus saw the man’s heart. Zaccheaus was glad Jesus would be an ‘uninvited guest’ to his home because he had already fully and excitedly given Jesus full ownership of his heart’s home. 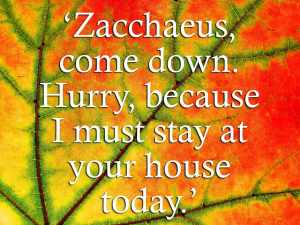 19 Jesus entered Jericho and made his way through the town. 2 There was a man there named Zacchaeus. He was the chief tax collector in the region, and he had become very rich. 3 He tried to get a look at Jesus, but he was too short to see over the crowd. 4 So he ran ahead and climbed a sycamore-fig tree beside the road, for Jesus was going to pass that way.

5 When Jesus came by, he looked up at Zacchaeus and called him by name. “Zacchaeus!” he said. “Quick, come down! I must be a guest in your home today.”

6 Zacchaeus quickly climbed down and took Jesus to his house in great excitement and joy. 7 But the people were displeased. “He has gone to be the guest of a notorious sinner,” they grumbled.

8 Meanwhile, Zacchaeus stood before the Lord and said, “I will give half my wealth to the poor, Lord, and if I have cheated people on their taxes, I will give them back four times as much!”

9 Jesus responded, “Salvation has come to this home today, for this man has shown himself to be a true son of Abraham. 10 For the Son of Man[a] came to seek and save those who are lost.”