He lived a lowly life, rejected by society as a blind beggar. So he became determined to meet Jesus. He couldn’t see Him. He heard He was passing by. Sheer determination caused Him to continue crying out when those around told Him to stop. And then Jesus saw Him. After that His life was forever changed. 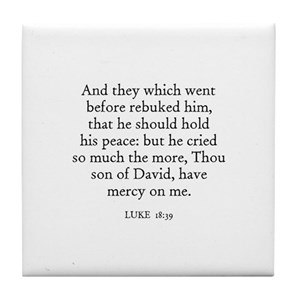 35 As Jesus approached Jericho, a blind beggar was sitting beside the road. 36 When he heard the noise of a crowd going past, he asked what was happening. 37 They told him that Jesus the Nazarene[a] was going by. 38 So he began shouting, “Jesus, Son of David, have mercy on me!”

But he only shouted louder, “Son of David, have mercy on me!”

40 When Jesus heard him, he stopped and ordered that the man be brought to him. As the man came near, Jesus asked him, 41 “What do you want me to do for you?”

42 And Jesus said, “All right, receive your sight! Your faith has healed you.”