I asked my son to read a blog I wrote. He said it was too lengthy.

Today, I write a lengthy blog. It don’t mind if the short attention spans of social media enthusiasts don’t read it. I trust that those who need to read it will, simply because it’s the Word of God. God’s Word will accomplish all that He wants it to accomplish.

So, the following two chapters from the Bible are about Joshua when he became the leader of the Israelites. He had to fill big shoes. He followed Moses but God helped him. 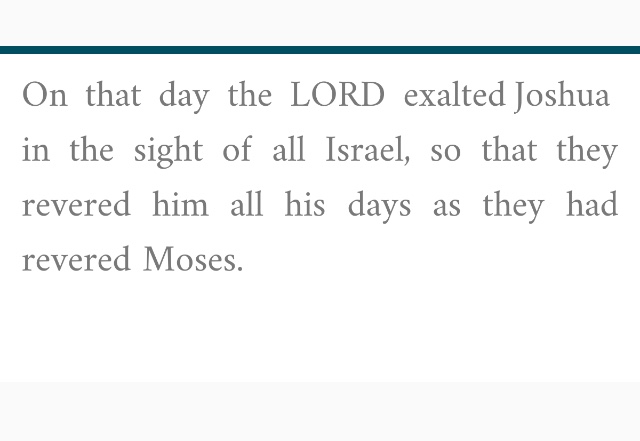 1 Early the next morning Joshua and all the Israelites left Acacia Grove[a] and arrived at the banks of the Jordan River, where they camped before crossing. 2 Three days later the Israelite officers went through the camp,3 giving these instructions to the people: “When you see the Levitical priests carrying the Ark of the Covenant of the Lord your God, move out from your positions and follow them. 4 Since you have never traveled this way before, they will guide you. Stay about half a mile[b] behind them, keeping a clear distance between you and the Ark. Make sure you don’t come any closer.”

5 Then Joshua told the people, “Purify yourselves, for tomorrow the Lord will do great wonders among you.”

6 In the morning Joshua said to the priests, “Lift up the Ark of the Covenant and lead the people across the river.” And so they started out and went ahead of the people.

7 The Lord told Joshua, “Today I will begin to make you a great leader in the eyes of all the Israelites. They will know that I am with you, just as I was with Moses. 8 Give this command to the priests who carry the Ark of the Covenant: ‘When you reach the banks of the Jordan River, take a few steps into the river and stop there.’”

9 So Joshua told the Israelites, “Come and listen to what the Lord your God says. 10 Today you will know that the living God is among you. He will surely drive out the Canaanites, Hittites, Hivites, Perizzites, Girgashites, Amorites, and Jebusites ahead of you.11 Look, the Ark of the Covenant, which belongs to the Lord of the whole earth, will lead you across the Jordan River!12 Now choose twelve men from the tribes of Israel, one from each tribe.13 The priests will carry the Ark of the Lord, the Lord of all the earth. As soon as their feet touch the water, the flow of water will be cut off upstream, and the river will stand up like a wall.”

14 So the people left their camp to cross the Jordan, and the priests who were carrying the Ark of the Covenant went ahead of them. 15 It was the harvest season, and the Jordan was overflowing its banks. But as soon as the feet of the priests who were carrying the Ark touched the water at the river’s edge, 16 the water above that point began backing up a great distance away at a town called Adam, which is near Zarethan. And the water below that point flowed on to the Dead Sea[c] until the riverbed was dry. Then all the people crossed over near the town of Jericho.

17 Meanwhile, the priests who were carrying the Ark of the Lord’s Covenant stood on dry ground in the middle of the riverbed as the people passed by. They waited there until the whole nation of Israel had crossed the Jordan on dry ground.

1 When all the people had crossed the Jordan, the Lord said to Joshua,2 “Now choose twelve men, one from each tribe. 3 Tell them, ‘Take twelve stones from the very place where the priests are standing in the middle of the Jordan. Carry them out and pile them up at the place where you will camp tonight.’”

4 So Joshua called together the twelve men he had chosen—one from each of the tribes of Israel. 5 He told them, “Go into the middle of the Jordan, in front of the Ark of the Lord your God. Each of you must pick up one stone and carry it out on your shoulder—twelve stones in all, one for each of the twelve tribes of Israel. 6 We will use these stones to build a memorial. In the future your children will ask you, ‘What do these stones mean?’ 7 Then you can tell them, ‘They remind us that the Jordan River stopped flowing when the Ark of the Lord’s Covenant went across.’ These stones will stand as a memorial among the people of Israel forever.”

8 So the men did as Joshua had commanded them. They took twelve stones from the middle of the Jordan River, one for each tribe, just as the Lord had told Joshua. They carried them to the place where they camped for the night and constructed the memorial there.

9 Joshua also set up another pile of twelve stones in the middle of the Jordan, at the place where the priests who carried the Ark of the Covenant were standing. And they are there to this day.

10 The priests who were carrying the Ark stood in the middle of the river until all of the Lord’s commands that Moses had given to Joshua were carried out. Meanwhile, the people hurried across the riverbed. 11 And when everyone was safely on the other side, the priests crossed over with the Ark of the Lordas the people watched.

12 The armed warriors from the tribes of Reuben, Gad, and the half-tribe of Manasseh led the Israelites across the Jordan, just as Moses had directed.13 These armed men—about 40,000 strong—were ready for battle, and the Lord was with them as they crossed over to the plains of Jericho.

14 That day the Lord made Joshua a great leader in the eyes of all the Israelites, and for the rest of his life they revered him as much as they had revered Moses.

19 The people crossed the Jordan on the tenth day of the first month.[e] Then they camped at Gilgal, just east of Jericho. 20 It was there at Gilgal that Joshua piled up the twelve stones taken from the Jordan River.

21 Then Joshua said to the Israelites, “In the future your children will ask, ‘What do these stones mean?’ 22 Then you can tell them, ‘This is where the Israelites crossed the Jordan on dry ground.’ 23 For the Lord your God dried up the river right before your eyes, and he kept it dry until you were all across, just as he did at the Red Sea[f] when he dried it up until we had all crossed over.24 He did this so all the nations of the earth might know that the Lord’s hand is powerful, and so you might fear the Lord your God forever.”