Josiah was a great king of Judah. The Bible likens him to King David. He did a difficult task and destroyed idols. This passage from the Bible goes into details what he had to do to remove idol worship and honor God again. It would be interesting to count all the things Josiah did to stop the people from worshipping false gods. He even destroyed shrines to Ashteroth that we’re built by ‘the wise’ King Solomon.  We should strive to be like him and turn to God with all our heart, soul and might. 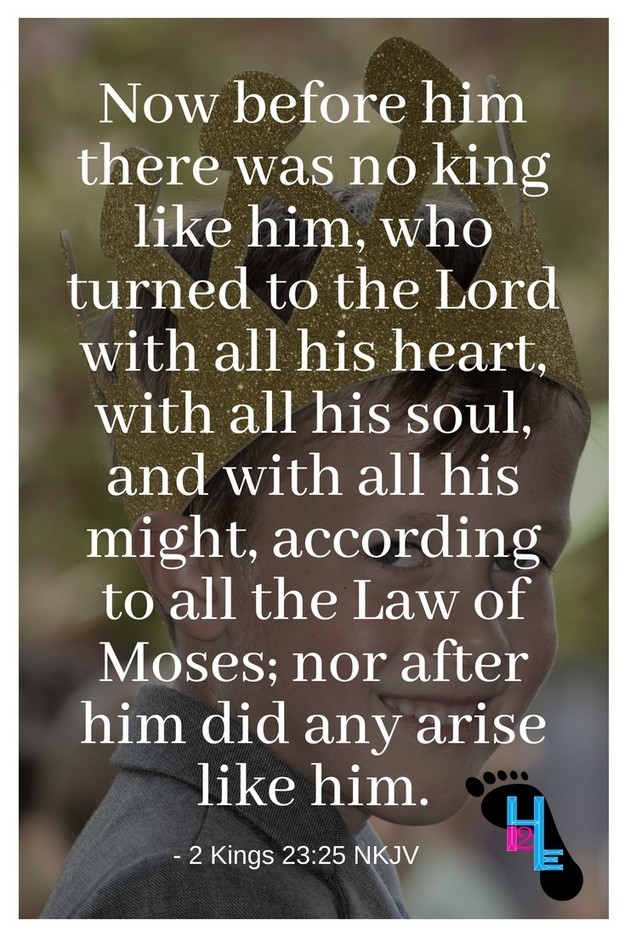 23 Then the king summoned all the elders of Judah and Jerusalem.2 And the king went up to the Temple of the Lord with all the people of Judah and Jerusalem, along with the priests and the prophets—all the people from the least to the greatest. There the king read to them the entire Book of the Covenant that had been found in the Lord’s Temple. 3 The king took his place of authority beside the pillar and renewed the covenant in the Lord’s presence. He pledged to obey the Lord by keeping all his commands, laws, and decrees with all his heart and soul. In this way, he confirmed all the terms of the covenant that were written in the scroll, and all the people pledged themselves to the covenant.

4 Then the king instructed Hilkiah the high priest and the priests of the second rank and the Temple gatekeepers to remove from the Lord’s Temple all the articles that were used to worship Baal, Asherah, and all the powers of the heavens. The king had all these things burned outside Jerusalem on the terraces of the Kidron Valley, and he carried the ashes away to Bethel. 5 He did away with the idolatrous priests, who had been appointed by the previous kings of Judah, for they had offered sacrifices at the pagan shrines throughout Judah and even in the vicinity of Jerusalem. They had also offered sacrifices to Baal, and to the sun, the moon, the constellations, and to all the powers of the heavens. 6 The king removed the Asherah pole from the Lord’s Temple and took it outside Jerusalem to the Kidron Valley, where he burned it. Then he ground the ashes of the pole to dust and threw the dust over the graves of the people. 7 He also tore down the living quarters of the male and female shrine prostitutes that were inside the Temple of the Lord, where the women wove coverings for the Asherah pole.

8 Josiah brought to Jerusalem all the priests who were living in other towns of Judah. He also defiled the pagan shrines, where they had offered sacrifices—all the way from Geba to Beersheba. He destroyed the shrines at the entrance to the gate of Joshua, the governor of Jerusalem. This gate was located to the left of the city gate as one enters the city. 9 The priests who had served at the pagan shrines were not allowed to serve at[a] the Lord’s altar in Jerusalem, but they were allowed to eat unleavened bread with the other priests.

10 Then the king defiled the altar of Topheth in the valley of Ben-Hinnom, so no one could ever again use it to sacrifice a son or daughter in the fire  as an offering to Molech.11 He removed from the entrance of the Lord’s Temple the horse statues that the former kings of Judah had dedicated to the sun. They were near the quarters of Nathan-melech the eunuch, an officer of the court.[c]The king also burned the chariots dedicated to the sun.

12 Josiah tore down the altars that the kings of Judah had built on the palace roof above the upper room of Ahaz. The king destroyed the altars that Manasseh had built in the two courtyards of the Lord’s Temple. He smashed them to bits and scattered the pieces in the Kidron Valley. 13 The king also desecrated the pagan shrines east of Jerusalem, to the south of the Mount of Corruption, where King Solomon of Israel had built shrines for Ashtoreth, the detestable goddess of the Sidonians; and for Chemosh, the detestable god of the Moabites; and for Molech, the vile god of the Ammonites. 14 He smashed the sacred pillars and cut down the Asherah poles. Then he desecrated these places by scattering human bones over them.

15 The king also tore down the altar at Bethel—the pagan shrine that Jeroboam son of Nebat had made when he caused Israel to sin. He burned down the shrine and ground it to dust, and he burned the Asherah pole. 16 Then Josiah turned around and noticed several tombs in the side of the hill. He ordered that the bones be brought out, and he burned them on the altar at Bethel to desecrate it. (This happened just as the Lord had promised through the man of God when Jeroboam stood beside the altar at the festival.)

Then Josiah turned and looked up at the tomb of the man of God who had predicted these things.17 “What is that monument over there?” Josiah asked.

And the people of the town told him, “It is the tomb of the man of God who came from Judah and predicted the very things that you have just done to the altar at Bethel!”

18 Josiah replied, “Leave it alone. Don’t disturb his bones.” So they did not burn his bones or those of the old prophet from Samaria.

19 Then Josiah demolished all the buildings at the pagan shrines in the towns of Samaria, just as he had done at Bethel. They had been built by the various kings of Israel and had made the Lord[g] very angry.20 He executed the priests of the pagan shrines on their own altars, and he burned human bones on the altars to desecrate them. Finally, he returned to Jerusalem.

21 King Josiah then issued this order to all the people: “You must celebrate the Passover to the Lordyour God, as required in this Book of the Covenant.” 22 There had not been a Passover celebration like that since the time when the judges ruled in Israel, nor throughout all the years of the kings of Israel and Judah. 23 But in the eighteenth year of King Josiah’s reign, this Passover was celebrated to the Lord in Jerusalem.

24 Josiah also got rid of the mediums and psychics, the household gods, the idols, and every other kind of detestable practice, both in Jerusalem and throughout the land of Judah. He did this in obedience to the laws written in the scroll that Hilkiah the priest had found in the Lord’s Temple. 25 Never before had there been a king like Josiah, who turned to the Lord with all his heart and soul and strength, obeying all the laws of Moses. And there has never been a king like him since.

26 Even so, the Lord was very angry with Judah because of all the wicked things Manasseh had done to provoke him. 27 For the Lord said, “I will also banish Judah from my presence just as I have banished Israel. And I will reject my chosen city of Jerusalem and the Temple where my name was to be honored.”