King Hezekiah of Judah honored God during his reign. God healed him of an illness. 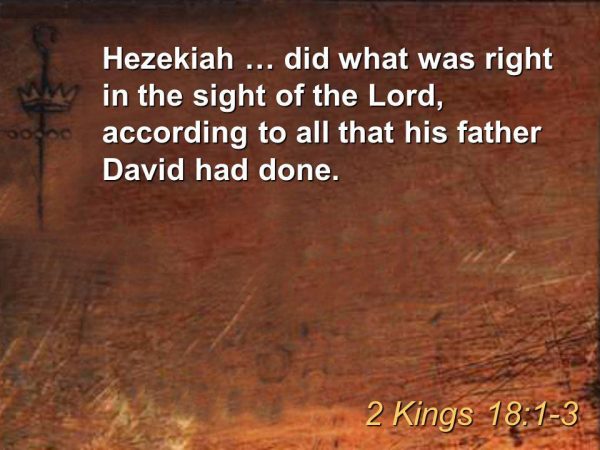 1 About that time Hezekiah became deathly ill, and the prophet Isaiah son of Amoz went to visit him. He gave the king this message: “This is what the Lord says: Set your affairs in order, for you are going to die. You will not recover from this illness.”

2 When Hezekiah heard this, he turned his face to the wall and prayed to the Lord, 3 “Remember, O Lord, how I have always been faithful to you and have served you single-mindedly, always doing what pleases you.” Then he broke down and wept bitterly.

4 But before Isaiah had left the middle courtyard, this message came to him from the Lord: 5 “Go back to Hezekiah, the leader of my people. Tell him, ‘This is what the Lord, the God of your ancestor David, says: I have heard your prayer and seen your tears. I will heal you, and three days from now you will get out of bed and go to the Temple of the Lord. 6 I will add fifteen years to your life, and I will rescue you and this city from the king of Assyria. I will defend this city for my own honor and for the sake of my servant David.’”

7 Then Isaiah said, “Make an ointment from figs.” So Hezekiah’s servants spread the ointment over the boil, and Hezekiah recovered!

8 Meanwhile, Hezekiah had said to Isaiah, “What sign will the Lord give to prove that he will heal me and that I will go to the Temple of the Lord three days from now?”

9 Isaiah replied, “This is the sign from the Lord to prove that he will do as he promised. Would you like the shadow on the sundial to go forward ten steps or backward ten steps?”