Paul spoke to the people in the city of Athens. They had many idols to different god’s. One of the idols said to the unknown god. Paul that as an opportunity to tell his listeners of the one true God. 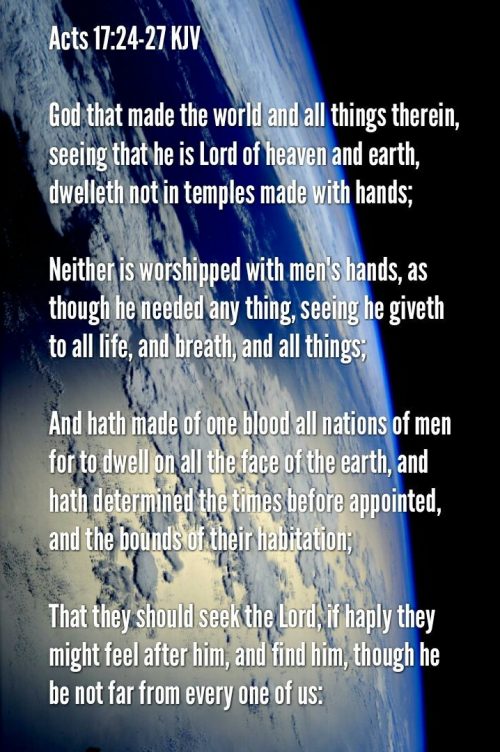 22So Paul, standing before the council, addressed them as follows: “Men of Athens, I notice that you are very religious in every way, 23 for as I was walking along I saw your many shrines. And one of your altars had this inscription on it: ‘To an Unknown God.’ This God, whom you worship without knowing, is the one I’m telling you about.

24 “He is the God who made the world and everything in it. Since he is Lord of heaven and earth, he doesn’t live in man-made temples, 25 and human hands can’t serve his needs—for he has no needs. He himself gives life and breath to everything, and he satisfies every need. 26 From one man[b] he created all the nations throughout the whole earth. He decided beforehand when they should rise and fall, and he determined their boundaries.

27 “His purpose was for the nations to seek after God and perhaps feel their way toward him and find him—though he is not far from any one of us. 28 For in him we live and move and exist. As some of your[c] own poets have said, ‘We are his offspring.’ 29 And since this is true, we shouldn’t think of God as an idol designed by craftsmen from gold or silver or stone.

30 “God overlooked people’s ignorance about these things in earlier times, but now he commands everyone everywhere to repent of their sins and turn to him. 31 For he has set a day for judging the world with justice by the man he has appointed, and he proved to everyone who this is by raising him from the dead.”

32 When they heard Paul speak about the resurrection of the dead, some laughed in contempt, but others said, “We want to hear more about this later.” 33 That ended Paul’s discussion with them, 34 but some joined him and became believers. Among them were Dionysius, a member of the council, a woman named Damaris, and others with them.