A man named Simon was a sorcerer. People were amazed by his acts of magic. He was called The Great One—The Power of God. He met the apostles as they preached and did miracles. He began following the apostle Phillip around and then began believing in Jesus. But if Simon had become a true believer he definitely had to grow and change because some of his intentions did not honor God. 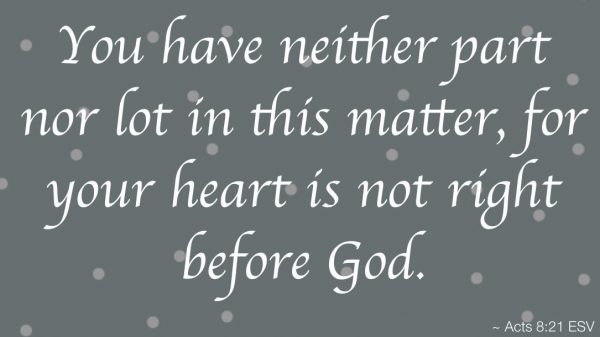 9 A man named Simon had been a sorcerer there for many years, amazing the people of Samaria and claiming to be someone great. 10 Everyone, from the least to the greatest, often spoke of him as “the Great One—the Power of God.” 11 They listened closely to him because for a long time he had astounded them with his magic.

12 But now the people believed Philip’s message of Good News concerning the Kingdom of God and the name of Jesus Christ. As a result, many men and women were baptized. 13 Then Simon himself believed and was baptized. He began following Philip wherever he went, and he was amazed by the signs and great miracles Philip performed.

14 When the apostles in Jerusalem heard that the people of Samaria had accepted God’s message, they sent Peter and John there. 15 As soon as they arrived, they prayed for these new believers to receive the Holy Spirit. 16 The Holy Spirit had not yet come upon any of them, for they had only been baptized in the name of the Lord Jesus. 17 Then Peter and John laid their hands upon these believers, and they received the Holy Spirit.

18 When Simon saw that the Spirit was given when the apostles laid their hands on people, he offered them money to buy this power. 19 “Let me have this power, too,” he exclaimed, “so that when I lay my hands on people, they will receive the Holy Spirit!”

20 But Peter replied, “May your money be destroyed with you for thinking God’s gift can be bought! 21 You can have no part in this, for your heart is not right with God. 22 Repent of your wickedness and pray to the Lord. Perhaps he will forgive your evil thoughts, 23 for I can see that you are full of bitter jealousy and are held captive by sin.”

24 “Pray to the Lord for me,” Simon exclaimed, “that these terrible things you’ve said won’t happen to me!”