Some time after Jesus ascended to Heaven believers had met together. The apostles were there. The Holy Spirit made His presence known and the people spoke in different tongues. 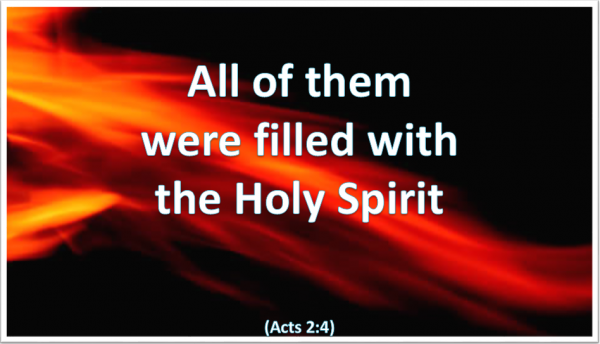 2 On the day of Pentecost all the believers were meeting together in one place. 2 Suddenly, there was a sound from heaven like the roaring of a mighty windstorm, and it filled the house where they were sitting. 3 Then, what looked like flames or tongues of fire appeared and settled on each of them. 4 And everyone present was filled with the Holy Spirit and began speaking in other languages, as the Holy Spirit gave them this ability.

5 At that time there were devout Jews from every nation living in Jerusalem. 6 When they heard the loud noise, everyone came running, and they were bewildered to hear their own languages being spoken by the believers.

7 They were completely amazed. “How can this be?” they exclaimed. “These people are all from Galilee,8 and yet we hear them speaking in our own native languages! 9 Here we are—Parthians, Medes, Elamites, people from Mesopotamia, Judea, Cappadocia, Pontus, the province of Asia, 10 Phrygia, Pamphylia, Egypt, and the areas of Libya around Cyrene, visitors from Rome 11 (both Jews and converts to Judaism), Cretans, and Arabs. And we all hear these people speaking in our own languages about the wonderful things God has done!” 12 They stood there amazed and perplexed. “What can this mean?” they asked each other.

13 But others in the crowd ridiculed them, saying, “They’re just drunk, that’s all!”