Peter healed a lame man outside the Temple. The Jewish people saw this so Peter used it as an opportunity to tell them about Jesus, the One God had sent to deliver them from sin. 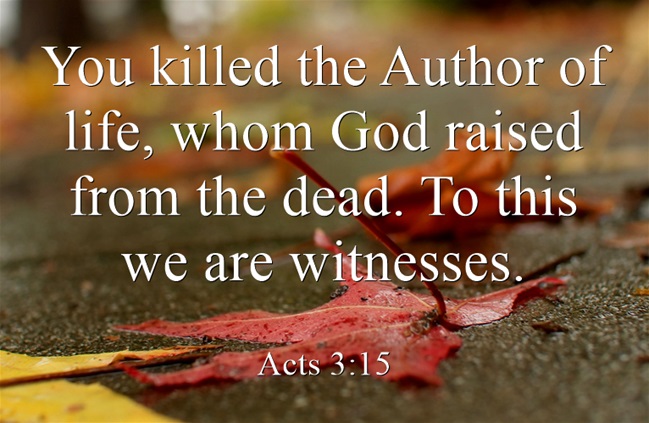 12 Peter saw his opportunity and addressed the crowd. “People of Israel,” he said, “what is so surprising about this? And why stare at us as though we had made this man walk by our own power or godliness? 13 For it is the God of Abraham, Isaac, and Jacob—the God of all our ancestors—who has brought glory to his servant Jesus by doing this. This is the same Jesus whom you handed over and rejected before Pilate, despite Pilate’s decision to release him. 14 You rejected this holy, righteous one and instead demanded the release of a murderer. 15 You killed the author of life, but God raised him from the dead. And we are witnesses of this fact!

16 “Through faith in the name of Jesus, this man was healed—and you know how crippled he was before. Faith in Jesus’ name has healed him before your very eyes.

17 “Friends, I realize that what you and your leaders did to Jesus was done in ignorance. 18 But God was fulfilling what all the prophets had foretold about the Messiah—that he must suffer these things. 19 Now repent of your sins and turn to God, so that your sins may be wiped away. 20 Then times of refreshment will come from the presence of the Lord, and he will again send you Jesus, your appointed Messiah. 21 For he must remain in heaven until the time for the final restoration of all things, as God promised long ago through his holy prophets. 22 Moses said, ‘The Lord your God will raise up for you a Prophet like me from among your own people. Listen carefully to everything he tells you.’ 23 Then Moses said, ‘Anyone who will not listen to that Prophet will be completely cut off from God’s people.’

24 “Starting with Samuel, every prophet spoke about what is happening today. 25 You are the children of those prophets, and you are included in the covenant God promised to your ancestors. For God said to Abraham, ‘Through your descendants all the families on earth will be blessed.’ 26 When God raised up his servant, Jesus, he sent him first to you people of Israel, to bless you by turning each of you back from your sinful ways.”