King David was the light of Israel. His soldiers were devoted to him. He would fight along side then in battle. 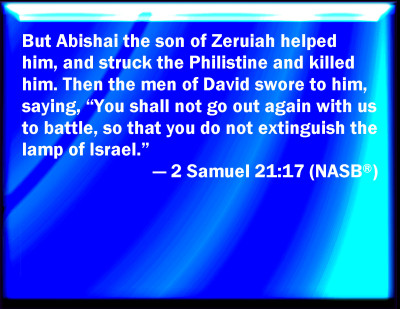 15 Once again the Philistines were at war with Israel. And when David and his men were in the thick of battle, David became weak and exhausted. 16 Ishbi-benob was a descendant of the giants; his bronze spearhead weighed more than seven pounds,[b] and he was armed with a new sword. He had cornered David and was about to kill him. 17 But Abishai son of Zeruiah came to David’s rescue and killed the Philistine. Then David’s men declared, “You are not going out to battle with us again! Why risk snuffing out the light of Israel?”