When Joshua was old he warned the Israelites not be ungodly like the people living in the promised land. Only follow God. They repeated three times to Joshua they would not do that. God intentionally left parts of the land unconquered. God’s people did not keep their promise. They did wrong and then would cry out to Him. God had mercy and would raise up a judge to deliver them. 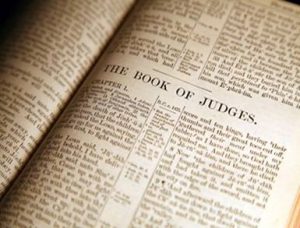 10 After that generation died, another generation grew up who did not acknowledge the Lord or remember the mighty things he had done for Israel.

11 The Israelites did evil in the Lord’s sight and served the images of Baal. 12 They abandoned the Lord, the God of their ancestors, who had brought them out of Egypt. They went after other gods, worshiping the gods of the people around them. And they angered the Lord. 13 They abandoned the Lord to serve Baal and the images of Ashtoreth. 14 This made the Lord burn with anger against Israel, so he handed them over to raiders who stole their possessions. He turned them over to their enemies all around, and they were no longer able to resist them. 15 Every time Israel went out to battle, the Lord fought against them, causing them to be defeated, just as he had warned. And the people were in great distress.

The Lord Rescues His People
16 Then the Lord raised up judges to rescue the Israelites from their attackers. 17 Yet Israel did not listen to the judges but prostituted themselves by worshiping other gods. How quickly they turned away from the path of their ancestors, who had walked in obedience to the Lord’s commands.

18 Whenever the Lord raised up a judge over Israel, he was with that judge and rescued the people from their enemies throughout the judge’s lifetime. For the Lord took pity on his people, who were burdened by oppression and suffering. 19 But when the judge died, the people returned to their corrupt ways, behaving worse than those who had lived before them. They went after other gods, serving and worshiping them. And they refused to give up their evil practices and stubborn ways.

20 So the Lord burned with anger against Israel. He said, “Because these people have violated my covenant, which I made with their ancestors, and have ignored my commands, 21 I will no longer drive out the nations that Joshua left unconquered when he died. 22 I did this to test Israel—to see whether or not they would follow the ways of the Lord as their ancestors did.” 23 That is why the Lord left those nations in place. He did not quickly drive them out or allow Joshua to conquer them all.