Gideon considered himself weak and the least in his whole family. God told him to rescue the Isrealites from the cruel Midianites. 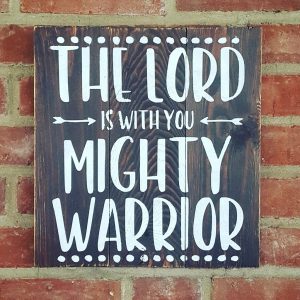 11 Then the angel of the Lord came and sat beneath the great tree at Ophrah, which belonged to Joash of the clan of Abiezer. Gideon son of Joash was threshing wheat at the bottom of a winepress to hide the grain from the Midianites. 12 The angel of the Lord appeared to him and said, “Mighty hero, the Lord is with you!”

13 “Sir,” Gideon replied, “if the Lord is with us, why has all this happened to us? And where are all the miracles our ancestors told us about? Didn’t they say, ‘The Lord brought us up out of Egypt’? But now the Lord has abandoned us and handed us over to the Midianites.”

14 Then the Lord turned to him and said, “Go with the strength you have, and rescue Israel from the Midianites. I am sending you!”

15 “But Lord,” Gideon replied, “how can I rescue Israel? My clan is the weakest in the whole tribe of Manasseh, and I am the least in my entire family!”

16 The Lord said to him, “I will be with you. And you will destroy the Midianites as if you were fighting against one man.”