Before Joshua died, he told the Israelites to serve God only and they stressed to him that’s what they would do. 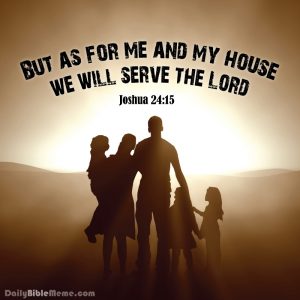 11 “When you crossed the Jordan River and came to Jericho, the men of Jericho fought against you, as did the Amorites, the Perizzites, the Canaanites, the Hittites, the Girgashites, the Hivites, and the Jebusites. But I gave you victory over them. 12 And I sent terror ahead of you to drive out the two kings of the Amorites. It was not your swords or bows that brought you victory. 13 I gave you land you had not worked on, and I gave you towns you did not build—the towns where you are now living. I gave you vineyards and olive groves for food, though you did not plant them.

14 “So fear the Lord and serve him wholeheartedly. Put away forever the idols your ancestors worshiped when they lived beyond the Euphrates River and in Egypt. Serve the Lord alone. 15 But if you refuse to serve the Lord, then choose today whom you will serve. Would you prefer the gods your ancestors served beyond the Euphrates? Or will it be the gods of the Amorites in whose land you now live? But as for me and my family, we will serve the Lord.”

16 The people replied, “We would never abandon the Lord and serve other gods. 17 For the Lord our God is the one who rescued us and our ancestors from slavery in the land of Egypt. He performed mighty miracles before our very eyes. As we traveled through the wilderness among our enemies, he preserved us. 18 It was the Lord who drove out the Amorites and the other nations living here in the land. So we, too, will serve the Lord, for he alone is our God.”

19 Then Joshua warned the people, “You are not able to serve the Lord, for he is a holy and jealous God. He will not forgive your rebellion and your sins. 20 If you abandon the Lord and serve other gods, he will turn against you and destroy you, even though he has been so good to you.”

21 But the people answered Joshua, “No, we will serve the Lord!”

22 “You are a witness to your own decision,” Joshua said. “You have chosen to serve the Lord.”

“Yes,” they replied, “we are witnesses to what we have said.”

23 “All right then,” Joshua said, “destroy the idols among you, and turn your hearts to the Lord, the God of Israel.”

24 The people said to Joshua, “We will serve the Lord our God. We will obey him alone.”

25 So Joshua made a covenant with the people that day at Shechem, committing them to follow the decrees and regulations of the Lord. 26 Joshua recorded these things in the Book of God’s Instructions. As a reminder of their agreement, he took a huge stone and rolled it beneath the terebinth tree beside the Tabernacle of the Lord.

27 Joshua said to all the people, “This stone has heard everything the Lord said to us. It will be a witness to testify against you if you go back on your word to God.”

28 Then Joshua sent all the people away to their own homelands.

Leaders Buried in the Promised Land
29 After this, Joshua son of Nun, the servant of the Lord, died at the age of 110. 30 They buried him in the land he had been allocated, at Timnath-serah in the hill country of Ephraim, north of Mount Gaash.