It would be amazing to study the battles Joshua and the Israelites went through as they took over the land promised to them by God. Then take those battle and compare them to situations that Christians work through today.

Joshua was a strong, courageous and fearless leader. Word was getting around to the different towns that were about to be conquered by the Israeli army and they were fearful. The town of Gibeon decided to use the tactic of deception and to protect themselves.  They said they were from a country far away. Joshua believed them and made an oath of peace with them. Then their deceit was discovered and Joshua gave them a curse to always do the lowly work of woodcutting and carrying water. 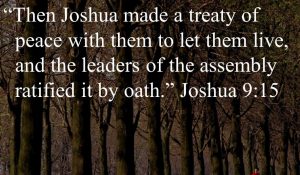 3 But when the people of Gibeon heard what Joshua had done to Jericho and Ai, 4 they resorted to deception to save themselves. They sent ambassadors to Joshua, loading their donkeys with weathered saddlebags and old, patched wineskins. 5 They put on worn-out, patched sandals and ragged clothes. And the bread they took with them was dry and moldy. 6 When they arrived at the camp of Israel at Gilgal, they told Joshua and the men of Israel, “We have come from a distant land to ask you to make a peace treaty with us.”

7 The Israelites replied to these Hivites, “How do we know you don’t live nearby? For if you do, we cannot make a treaty with you.”

8 They replied, “We are your servants.”

“But who are you?” Joshua demanded. “Where do you come from?”

9 They answered, “Your servants have come from a very distant country. We have heard of the might of the Lord your God and of all he did in Egypt. 10 We have also heard what he did to the two Amorite kings east of the Jordan River—King Sihon of Heshbon and King Og of Bashan (who lived in Ashtaroth). 11 So our elders and all our people instructed us, ‘Take supplies for a long journey. Go meet with the people of Israel and tell them, “We are your servants; please make a treaty with us.”’

12 “This bread was hot from the ovens when we left our homes. But now, as you can see, it is dry and moldy. 13 These wineskins were new when we filled them, but now they are old and split open. And our clothing and sandals are worn out from our very long journey.”

14 So the Israelites examined their food, but they did not consult the Lord. 15 Then Joshua made a peace treaty with them and guaranteed their safety, and the leaders of the community ratified their agreement with a binding oath.

16 Three days after making the treaty, they learned that these people actually lived nearby! 17 The Israelites set out at once to investigate and reached their towns in three days. The names of these towns were Gibeon, Kephirah, Beeroth, and Kiriath-jearim. 18 But the Israelites did not attack the towns, for the Israelite leaders had made a vow to them in the name of the Lord, the God of Israel.

The people of Israel grumbled against their leaders because of the treaty. 19 But the leaders replied, “Since we have sworn an oath in the presence of the Lord, the God of Israel, we cannot touch them. 20 This is what we must do. We must let them live, for divine anger would come upon us if we broke our oath. 21 Let them live.” So they made them woodcutters and water carriers for the entire community, as the Israelite leaders directed.

22 Joshua called together the Gibeonites and said, “Why did you lie to us? Why did you say that you live in a distant land when you live right here among us? 23 May you be cursed! From now on you will always be servants who cut wood and carry water for the house of my God.”

24 They replied, “We did it because we—your servants—were clearly told that the Lord your God commanded his servant Moses to give you this entire land and to destroy all the people living in it. So we feared greatly for our lives because of you. That is why we have done this. 25 Now we are at your mercy—do to us whatever you think is right.”

26 So Joshua did not allow the people of Israel to kill them. 27 But that day he made the Gibeonites the woodcutters and water carriers for the community of Israel and for the altar of the Lord—wherever the Lord would choose to build it. And that is what they do to this day.