Word spread like wildfire that Joshua and his army were taking over the land. The kings united together to fight against them. In the end they were defeated. 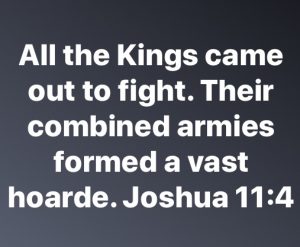 4 All these kings came out to fight. Their combined armies formed a vast horde. And with all their horses and chariots, they covered the landscape like the sand on the seashore. 5 The kings joined forces and established their camp around the water near Merom to fight against Israel.

6 Then the Lord said to Joshua, “Do not be afraid of them. By this time tomorrow I will hand all of them over to Israel as dead men. Then you must cripple their horses and burn their chariots.”

7 So Joshua and all his fighting men traveled to the water near Merom and attacked suddenly. 8 And the Lord gave them victory over their enemies. The Israelites chased them as far as Greater Sidon and Misrephoth-maim, and eastward into the valley of Mizpah, until not one enemy warrior was left alive. 9 Then Joshua crippled the horses and burned all the chariots, as the Lord had instructed.

10 Joshua then turned back and captured Hazor and killed its king. (Hazor had at one time been the capital of all these kingdoms.) 11 The Israelites completely destroyed every living thing in the city, leaving no survivors. Not a single person was spared. And then Joshua burned the city.

12 Joshua slaughtered all the other kings and their people, completely destroying them, just as Moses, the servant of the Lord, had commanded. 13 But the Israelites did not burn any of the towns built on mounds except Hazor, which Joshua burned. 14 And the Israelites took all the plunder and livestock of the ravaged towns for themselves. But they killed all the people, leaving no survivors. 15 As the Lord had commanded his servant Moses, so Moses commanded Joshua. And Joshua did as he was told, carefully obeying all the commands that the Lord had given to Moses.

16 So Joshua conquered the entire region—the hill country, the entire Negev, the whole area around the town of Goshen, the western foothills, the Jordan Valley,[d] the mountains of Israel, and the Galilean foothills. 17 The Israelite territory now extended all the way from Mount Halak, which leads up to Seir in the south, as far north as Baal-gad at the foot of Mount Hermon in the valley of Lebanon. Joshua killed all the kings of those territories, 18 waging war for a long time to accomplish this. 19 No one in this region made peace with the Israelites except the Hivites of Gibeon. All the others were defeated. 20 For the Lord hardened their hearts and caused them to fight the Israelites. So they were completely destroyed without mercy, as the Lord had commanded Moses.