Jesus was falsely accused of blasphemy by Jewish leaders. 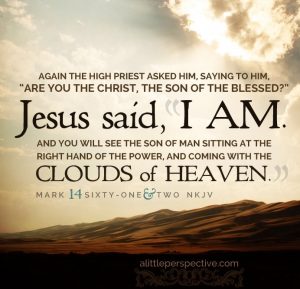 57 Finally, some men stood up and gave this false testimony: 58 “We heard him say, ‘I will destroy this Temple made with human hands, and in three days I will build another, made without human hands.’” 59 But even then they didn’t get their stories straight!

60 Then the high priest stood up before the others and asked Jesus, “Well, aren’t you going to answer these charges? What do you have to say for yourself?” 61 But Jesus was silent and made no reply. Then the high priest asked him, “Are you the Messiah, the Son of the Blessed One?”

62 Jesus said, “I am. And you will see the Son of Man seated in the place of power at God’s right hand and coming on the clouds of heaven.”

63 Then the high priest tore his clothing to show his horror and said, “Why do we need other witnesses? 64 You have all heard his blasphemy. What is your verdict?”

“Guilty!” they all cried. “He deserves to die!”

65 Then some of them began to spit at him, and they blindfolded him and beat him with their fists. “Prophesy to us,” they jeered. And the guards slapped him as they took him away.