Jesus had supper with His twelve disciples before He went to the cross. 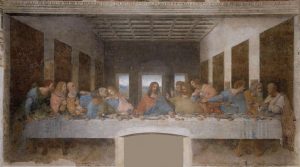 22 As they were eating, Jesus took some bread and blessed it. Then he broke it in pieces and gave it to the disciples, saying, “Take it, for this is my body.”

23 And he took a cup of wine and gave thanks to God for it. He gave it to them, and they all drank from it. 24 And he said to them, “This is my blood, which confirms the covenant[a] between God and his people. It is poured out as a sacrifice for many. 25 I tell you the truth, I will not drink wine again until the day I drink it new in the Kingdom of God.”

26 Then they sang a hymn and went out to the Mount of Olives.

27 On the way, Jesus told them, “All of you will desert me. For the Scriptures say,

‘God will strike the Shepherd,
and the sheep will be scattered.’
28 But after I am raised from the dead, I will go ahead of you to Galilee and meet you there.”