Jesus healed ten lepers. Those who had leprosy in the Bible days were outcasts. They had a skin disease that would take over their body and cause a repulsive appearance and odor.

Only one leper came back to say thanks and give honor for the miracle that had greatly changed his life. He fell at Jesus’ feet and praised Him loudly.

Jesus still heals today and changes lives. Easter is coming next Sunday. On that day, I pray Christians would fall down at the feet of Jesus and praise Him loudly for how He has forgiven us and healed us by overcoming death and Hell. 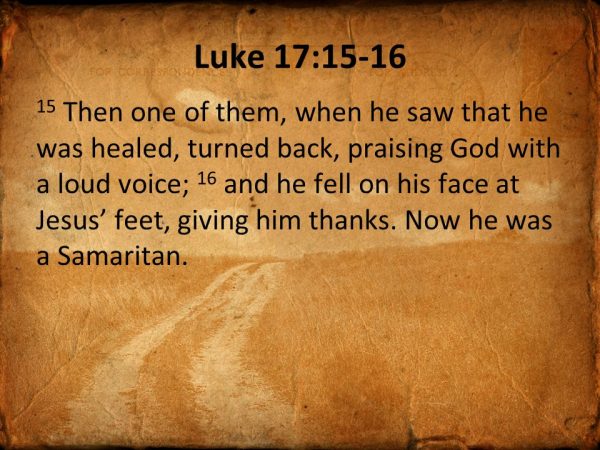 11 As Jesus continued on toward Jerusalem, he reached the border between Galilee and Samaria. 12 As he entered a village there, ten men with leprosy stood at a distance, 13 crying out, “Jesus, Master, have mercy on us!”

14 He looked at them and said, “Go show yourselves to the priests.”[a] And as they went, they were cleansed of their leprosy.

15 One of them, when he saw that he was healed, came back to Jesus, shouting, “Praise God!” 16 He fell to the ground at Jesus’ feet, thanking him for what he had done. This man was a Samaritan.

17 Jesus asked, “Didn’t I heal ten men? Where are the other nine? 18 Has no one returned to give glory to God except this foreigner?” 19 And Jesus said to the man, “Stand up and go. Your faith has healed you.[b