In my youth, I listened to music a lot. Sometimes a secular song on the radio would get stuck in my head. Over and over it would overtake my train of thought. I would have to intentionally force it out by thinking deeply about something else that interested me. Some of the worst examples, I can think of, of these type songs are classic rock songs like Don’t Fear The Reaper by Blue Oyster Cult, the theme song from the classic tv series, MASH, named Suicide Is Painless and Cocaine by Eric Clapton.

When the Israelites were about to enter their deeply-longed-for Promised Land, God told Moses to give them a song to remember all that He had cautioned them about to prepare them for their abundant blessing that would soon be coming. At the end of the song were words saying they would turn away from God. God did this to hopefully defer them from making that mistake. In the middle of the song God reminded His people of how He had taken good care of them. The song is 43 verses long. God wanted to make a great and lasting impression on the people He so greatly loved. Music is linked to our emotions and when we are emotionally impacted we have stronger memories.

Nowadays, I go to church and leave with songs of encouragement and the hope that comes from Jesus stuck in my head. I intentionally let these songs repeat over and over. If I ever get a bad worded song In my thoughts I sing out loudly the chorus to an upbeat old hymn I learned as a kid, There’s Within My Heart A Melody. 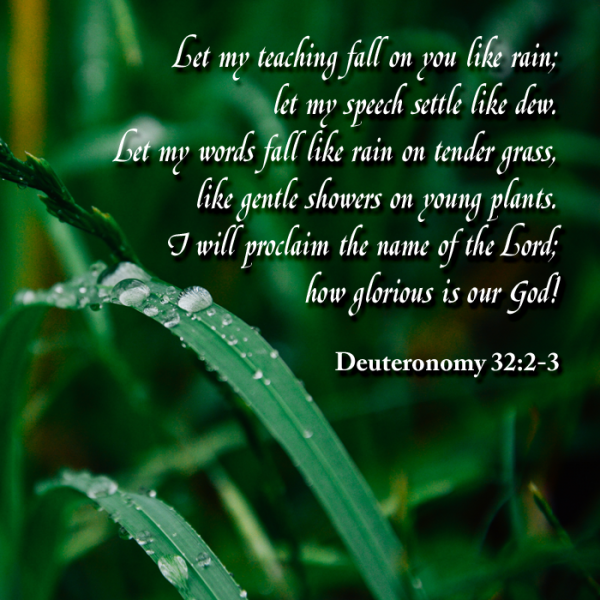 “Listen, O heavens, and I will speak!
Hear, O earth, the words that I say!
2 Let my teaching fall on you like rain;
let my speech settle like dew.
Let my words fall like rain on tender grass,
like gentle showers on young plants.
3 I will proclaim the name of the Lord;
how glorious is our God!
4 He is the Rock; his deeds are perfect.
Everything he does is just and fair.
He is a faithful God who does no wrong;
how just and upright he is!

5 “But they have acted corruptly toward him;
when they act so perversely,
are they really his children?[a]
They are a deceitful and twisted generation.
6 Is this the way you repay the Lord,
you foolish and senseless people?
Isn’t he your Father who created you?
Has he not made you and established you?
7 Remember the days of long ago;
think about the generations past.
Ask your father, and he will inform you.
Inquire of your elders, and they will tell you.
8 When the Most High assigned lands to the nations,
when he divided up the human race,
he established the boundaries of the peoples
according to the number in his heavenly court.[b]

9 “For the people of Israel belong to the Lord;
Jacob is his special possession.
10 He found them in a desert land,
in an empty, howling wasteland.
He surrounded them and watched over them;
he guarded them as he would guard his own eyes.[c]
11 Like an eagle that rouses her chicks
and hovers over her young,
so he spread his wings to take them up
and carried them safely on his pinions.
12 The Lord alone guided them;
they followed no foreign gods.
13 He let them ride over the highlands
and feast on the crops of the fields.
He nourished them with honey from the rock
and olive oil from the stony ground.
14 He fed them yogurt from the herd
and milk from the flock,
together with the fat of lambs.
He gave them choice rams from Bashan, and goats,
together with the choicest wheat.
You drank the finest wine,
made from the juice of grapes.

15 “But Israel[d] soon became fat and unruly;
the people grew heavy, plump, and stuffed!
Then they abandoned the God who had made them;
they made light of the Rock of their salvation.
16 They stirred up his jealousy by worshiping foreign gods;
they provoked his fury with detestable deeds.
17 They offered sacrifices to demons, which are not God,
to gods they had not known before,
to new gods only recently arrived,
to gods their ancestors had never feared.
18 You neglected the Rock who had fathered you;
you forgot the God who had given you birth.

19 “The Lord saw this and drew back,
provoked to anger by his own sons and daughters.
20 He said, ‘I will abandon them;
then see what becomes of them.
For they are a twisted generation,
children without integrity.
21 They have roused my jealousy by worshiping things that are not God;
they have provoked my anger with their useless idols.
Now I will rouse their jealousy through people who are not even a people;
I will provoke their anger through the foolish Gentiles.
22 For my anger blazes forth like fire
and burns to the depths of the grave.[e]
It devours the earth and all its crops
and ignites the foundations of the mountains.
23 I will heap disasters upon them
and shoot them down with my arrows.
24 I will weaken them with famine,
burning fever, and deadly disease.
I will send the fangs of wild beasts
and poisonous snakes that glide in the dust.
25 Outside, the sword will bring death,
and inside, terror will strike
both young men and young women,
both infants and the aged.
26 I would have annihilated them,
wiping out even the memory of them.
27 But I feared the taunt of Israel’s enemy,
who might misunderstand and say,
“Our own power has triumphed!
The Lord had nothing to do with this!”’

28 “But Israel is a senseless nation;
the people are foolish, without understanding.
29 Oh, that they were wise and could understand this!
Oh, that they might know their fate!
30 How could one person chase a thousand of them,
and two people put ten thousand to flight,
unless their Rock had sold them,
unless the Lord had given them up?
31 But the rock of our enemies is not like our Rock,
as even they recognize.[f]
32 Their vine grows from the vine of Sodom,
from the vineyards of Gomorrah.
Their grapes are poison,
and their clusters are bitter.
33 Their wine is the venom of serpents,
the deadly poison of cobras.

34 “The Lord says, ‘Am I not storing up these things,
sealing them away in my treasury?
35 I will take revenge; I will pay them back.
In due time their feet will slip.
Their day of disaster will arrive,
and their destiny will overtake them.’

36 “Indeed, the Lord will give justice to his people,
and he will change his mind about[g] his servants,
when he sees their strength is gone
and no one is left, slave or free.
37 Then he will ask, ‘Where are their gods,
the rocks they fled to for refuge?
38 Where now are those gods,
who ate the fat of their sacrifices
and drank the wine of their offerings?
Let those gods arise and help you!
Let them provide you with shelter!
39 Look now; I myself am he!
There is no other god but me!
I am the one who kills and gives life;
I am the one who wounds and heals;
no one can be rescued from my powerful hand!
40 Now I raise my hand to heaven
and declare, “As surely as I live,
41 when I sharpen my flashing sword
and begin to carry out justice,
I will take revenge on my enemies
and repay those who reject me.
42 I will make my arrows drunk with blood,
and my sword will devour flesh—
the blood of the slaughtered and the captives,
and the heads of the enemy leaders.”’

43 “Rejoice with him, you heavens,
and let all of God’s angels worship him.[h]
Rejoice with his people, you Gentiles,
and let all the angels be strengthened in him.[i]
For he will avenge the blood of his children[j];
he will take revenge against his enemies.
He will repay those who hate him[k]
and cleanse his people’s land.”

44 So Moses came with Joshua[l] son of Nun and recited all the words of this song to the people.

45 When Moses had finished reciting all these words to the people of Israel, 46 he added: “Take to heart all the words of warning I have given you today. Pass them on as a command to your children so they will obey every word of these instructions. 47 These instructions are not empty words—they are your life! By obeying them you will enjoy a long life in the land you will occupy when you cross the Jordan River.”