Jesus’ disciples were arguing about who was the greatest among them. Jesus stopped them in their tracks by saying humble children are the greatest, even greater than His disciples.

I’m going to work today to do my humble job of caring for a class of two year olds at a daycare. They’ve taught me a lot in the past few years. They are the most eager to learn. They have no learning boundaries. They push themselves to their limits. They help me learn human psychology in its simplest form. I study their wide range of personalities to know how to care for them. Some are quiet and shy and need to be held close several times. Some are bold and go for every thing they want to do. In general, two year olds think the world revolves around them. They are showing their humanness and need to learn unselfishness. It’s a ‘me’ world. If they run to me and give me a knee hug I don’t refuse them because it’s one of the main gifts they know how to give. I have to work hard to train them to share, take turns and be a helper.

Jesus said to welcome little ones. I have the privilege of obeying Jesus’ words everyday I go to work. 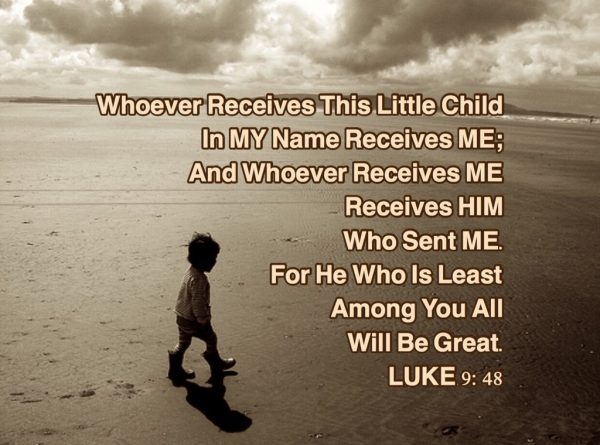