There are three verses that say with God nothing shall be impossible. One occurred when the angel told Mary, a poor teenager, she was pregnant with Jesus.  Another occurred when Jesus was talking to a young man who wanted to follow Him but he didn’t want to give up his riches. The other verse occurred when Jesus healed a man’s son of demon possession.

I believe that with God nothing is impossible. He spoke and created everything from nothing. God can use me to make the impossible a reality so that His name will be honored. 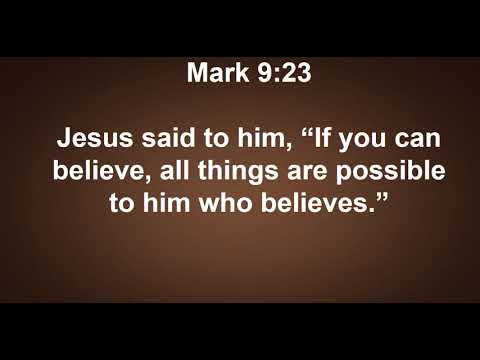 17 One of the men in the crowd spoke up and said, “Teacher, I brought my son so you could heal him. He is possessed by an evil spirit that won’t let him talk.18 And whenever this spirit seizes him, it throws him violently to the ground. Then he foams at the mouth and grinds his teeth and becomes rigid.[d] So I asked your disciples to cast out the evil spirit, but they couldn’t do it.”

20 So they brought the boy. But when the evil spirit saw Jesus, it threw the child into a violent convulsion, and he fell to the ground, writhing and foaming at the mouth.

21 “How long has this been happening?” Jesus asked the boy’s father.

He replied, “Since he was a little boy.22 The spirit often throws him into the fire or into water, trying to kill him. Have mercy on us and help us, if you can.”

23 “What do you mean, ‘If I can’?”Jesus asked. “Anything is possible if a person believes.”

24 The father instantly cried out, “I do believe, but help me overcome my unbelief!”

25 When Jesus saw that the crowd of onlookers was growing, he rebuked the evil[f] spirit. “Listen, you spirit that makes this boy unable to hear and speak,” he said. “I command you to come out of this child and never enter him again!”

26 Then the spirit screamed and threw the boy into another violent convulsion and left him. The boy appeared to be dead. A murmur ran through the crowd as people said, “He’s dead.” 27 But Jesus took him by the hand and helped him to his feet, and he stood up.