Jesus came to help the Jewish people. He preached to them and healed them. After His death and resurrection He told His followers to preach about Him to all the rest of the world. People who were not Jews were called Gentiles in Jesus’ day.

Once a Gentile woman came to Jesus asking Him to heal her daughter from a demon. They talked some and then because of her faith Jesus healed her daughter without even seeing the young girl and touching her. 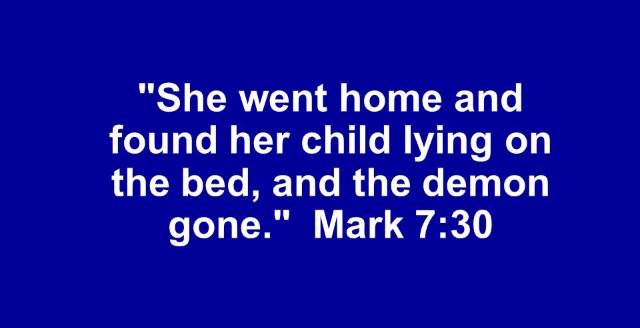 25 Right away a woman who had heard about him came and fell at his feet. Her little girl was possessed by an evil[a]spirit, 26 and she begged him to cast out the demon from her daughter.

Since she was a Gentile, born in Syrian Phoenicia, 27 Jesus told her, “First I should feed the children—my own family, the Jews.[b] It isn’t right to take food from the children and throw it to the dogs.”

28 She replied, “That’s true, Lord, but even the dogs under the table are allowed to eat the scraps from the children’s plates.”

29 “Good answer!” he said. “Now go home, for the demon has left your daughter.” 30 And when she arrived home, she found her little girl lying quietly in bed, and the demon was gone.