If you want to be a great leader, you must have a strong attitude to serve others. Jesus became a humble servant when He died on the cross and then conquered sin and death. He served all humanity and made a way for us to live an abundant life on earth and then live for eternity in Heaven. 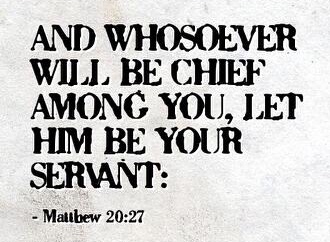 20 Then the mother of James and John, the sons of Zebedee, came to Jesus with her sons. She knelt respectfully to ask a favor. 21 “What is your request?” he asked.

She replied, “In your Kingdom, please let my two sons sit in places of honor next to you, one on your right and the other on your left.”

22 But Jesus answered by saying to them, “You don’t know what you are asking! Are you able to drink from the bitter cup of suffering I am about to drink?”

23 Jesus told them, “You will indeed drink from my bitter cup. But I have no right to say who will sit on my right or my left. My Father has prepared those places for the ones he has chosen.”

24 When the ten other disciples heard what James and John had asked, they were indignant. 25 But Jesus called them together and said, “You know that the rulers in this world lord it over their people, and officials flaunt their authority over those under them. 26 But among you it will be different. Whoever wants to be a leader among you must be your servant,27 and whoever wants to be first among you must become your slave. 28 For even the Son of Man came not to be served but to serve others and to give his life as a ransom for many.”