Peter who was possibly Jesus’ most passionate disciple had big emotions. Sometimes he greatly glorified God with his words. At other times he put his foot in his mouth and said the the wrong thing.

In Matthew 16, there are a few notable verses as Jesus and his disciples converse. Peter stands out in this passage. Here is a list of notable verses along with Peter interacting with Jesus. And then the full passage follows.

1)Jesus asked His disciple who people thought He was. Peter promptly replies that He is the Messiah that the prophets spoke of to the Jews. Jesus was pleased and blessed Peter.

2)Then Jesus blessed Peter even more by telling him he was Peter, which means rock, and upon such faith in God, Jesus Himself, would build His church. Even hell could not overcome such dedication and trust in God.

3)Jesus then began telling His disciples how He would die and then raise from the dead.

4)In all his zeal and emotion Peter then spoke up and said the wrong thing. He told Jesus such things wouldn’t happen.

5)Jesus directly got on to him and commanded the devil to stop being involved in the situation. 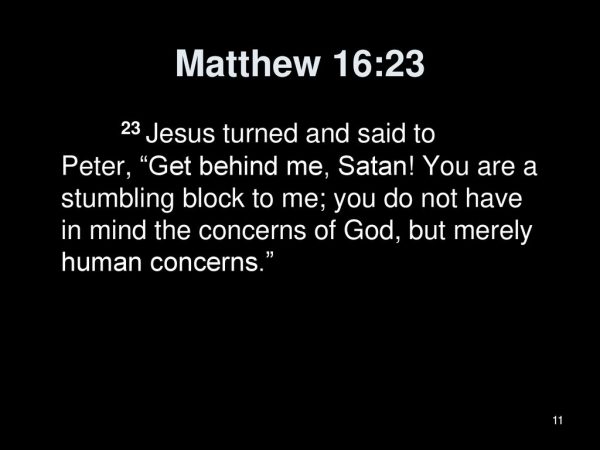 23 Jesus turned and said to Peter, Get behind me, Satan! You are a stumbling block to me; you do not have in mind the concerns of God, but merely human concerns. 11.

13 When Jesus came to the region of Caesarea Philippi, he asked his disciples, “Who do people say that the Son of Man is?”[a]

14 “Well,” they replied, “some say John the Baptist, some say Elijah, and others say Jeremiah or one of the other prophets.”

16 Simon Peter answered, “You are the Messiah,[b] the Son of the living God.”

17 Jesus replied, “You are blessed, Simon son of John,[c] because my Father in heaven has revealed this to you. You did not learn this from any human being. 18 Now I say to you that you are Peter (which means ‘rock’),[d]and upon this rock I will build my church, and all the powers of hell[e] will not conquer it. 19 And I will give you the keys of the Kingdom of Heaven. Whatever you forbid[f] on earth will be forbidden in heaven, and whatever you permit[g] on earth will be permitted in heaven.”

20 Then he sternly warned the disciples not to tell anyone that he was the Messiah.

21 From then on Jesus[h] began to tell his disciples plainly that it was necessary for him to go to Jerusalem, and that he would suffer many terrible things at the hands of the elders, the leading priests, and the teachers of religious law. He would be killed, but on the third day he would be raised from the dead.

22 But Peter took him aside and began to reprimand him[i] for saying such things. “Heaven forbid, Lord,” he said. “This will never happen to you!”

23 Jesus turned to Peter and said, “Get away from me, Satan! You are a dangerous trap to me. You are seeing things merely from a human point of view, not from God’s.”

24 Then Jesus said to his disciples, “If any of you wants to be my follower, you must give up your own way, take up your cross, and follow me. 25 If you try to hang on to your life, you will lose it. But if you give up your life for my sake, you will save it. 26 And what do you benefit if you gain the whole world but lose your own soul?[j] Is anything worth more than your soul? 27 For the Son of Man will come with his angels in the glory of his Father and will judge all people according to their deeds. 28 And I tell you the truth, some standing here right now will not die before they see the Son of Man coming in his Kingdom.”

I pray today. God, in all our emotion and zeal for you, let us remember to control our tongue, deny ourselves and submit to you. With Jesus, I pray.