Jesus is the world’s greatest leader. He died and came back to life so that all humanity has the option of life after they die.

In Matthew 14, a close relative and the humble introducer of Jesus’ ministry to those around, John the Baptist, was cruelly beheaded by King Herod. I know this would have hurt Jesus. He needed time alone to think and sort through the pain of this awful deed.

After He was told the news He quickly left to go someplace to be alone. His mind was heavy. In His humanity, Jesus needed to cry over His great loss. For a careless stupid reason, John the Baptist had been killed. The king liked John but because of his lust over a woman and her dance, he was trapped by his speaking without thinking first. Most likely he was drunk. And now the humble John the Baptist was humiliated in death.

Jesus left his ministering to be alone but as he went the crowds kept coming. So what did Jesus do? He set aside the great heaviness of losing his beloved cousin and focused on the people. He went beyond the second mile of caring for them and poured compassion out on them and healed them. Jesus called John the greatest. Those words may have comforted Jesus as He continued ministering when He wanted to grieve. 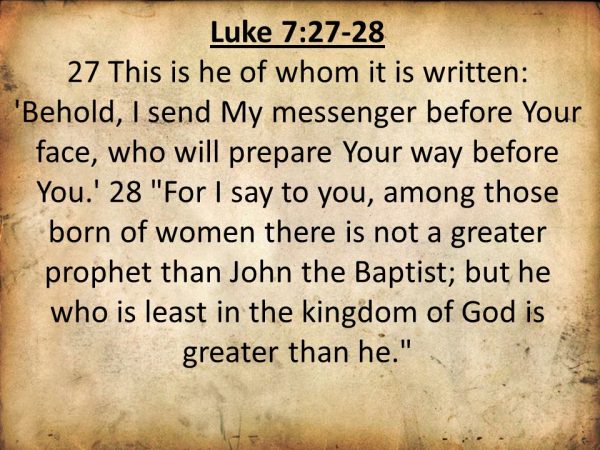 10 So John was beheaded in the prison,11 and his head was brought on a tray and given to the girl, who took it to her mother. 12 Later, John’s disciples came for his body and buried it. Then they went and told Jesus what had happened.

13 As soon as Jesus heard the news, he left in a boat to a remote area to be alone. But the crowds heard where he was headed and followed on foot from many towns. 14 Jesus saw the huge crowd as he stepped from the boat, and he had compassion on them and healed their sick.

I pray today…Jesus I thank You that we are hidden in You. You set the example of being the worlds greatest leader. You ARE the King of Kings and Lord of lords. Give us the strength today to minister like you.