It was prophesied in Isaiah 9:1-2 of the places where Jesus would begin His Ministry. 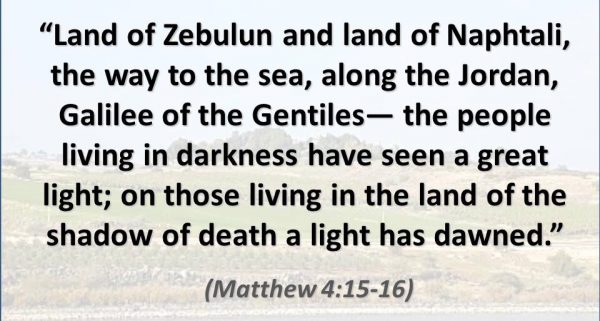 12 When Jesus heard that John had been arrested, he left Judea and returned to Galilee. 13 He went first to Nazareth, then left there and moved to Capernaum, beside the Sea of Galilee, in the region of Zebulun and Naphtali.14 This fulfilled what God said through the prophet Isaiah:

15 “In the land of Zebulun and of Naphtali,
beside the sea, beyond the Jordan River,
in Galilee where so many Gentiles live,
16 the people who sat in darkness
have seen a great light.
And for those who lived in the land where death casts its shadow,
a light has shined.”

17 From then on Jesus began to preach, “Repent of your sins and turn to God, for the Kingdom of Heaven is near.”