In Revelation 2, it tells about seven churches in the endtimes. These intrigue me. It describes the churches of today. I look at the culture or personality of the church I attend today and in past years. I look at their strengths and weaknesses and then compare them to the seven churches discussed. John the Apostle wrote the book of Revelation while he was in prison for preaching on the Island of Patmos. He wrote down these end time prophecies as Jesus spoke to him.

The first one is Ephesus. There is also the book of Ephesians in which Paul wrote a letter to this church at Ephesus. As I said earlier, It’s culture  still exists today so do the other six churches. Together we are the existence (or body) of Jesus on this earth to do His good works. 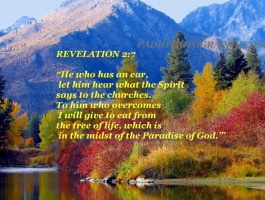 2 “Write this letter to the angel of the church in Ephesus. This is the message from the one who holds the seven stars in his right hand, the one who walks among the seven gold lampstands:

2 “I know all the things you do. I have seen your hard work and your patient endurance. I know you don’t tolerate evil people. You have examined the claims of those who say they are apostles but are not. You have discovered they are liars. 3 You have patiently suffered for me without quitting.

4 “But I have this complaint against you. You don’t love me or each other as you did at first! 5 Look how far you have fallen! Turn back to me and do the works you did at first. If you don’t repent, I will come and remove your lampstand from its place among the churches. 6 But this is in your favor: You hate the evil deeds of the Nicolaitans, just as I do.

7 “Anyone with ears to hear must listen to the Spirit and understand what he is saying to the churches. To everyone who is victorious I will give fruit from the tree of life in the paradise of God.