I’m so thankful to God for new and interesting insight into His Word.

The book of James was written by the brother of Jesus. He was a skeptic about Jesus until later in his life. James 1 begins talking about rejoicing when you have troubles. A little later it talks about enduring and overcoming temptation to do wrong so that God can richly reward you.

I find it interesting sandwiched in between the topics of troubles and temptations in James 1, he talks about the rich and the poor. He said the poor can boast and the rich are humbled by God. All through the Bible God contrasts humbleness and pridefulness. God has honored the poor and the achievements of the rich will fade.

This passage talks about troubles at its start. When I think of trouble, I think mainly of the poor with money troubles. Then later in James 1, it talks about temptation. The rich most likely deal with temptation more than the poor. But, of course, in a general sense everyone deals with both.

Right before the passage about the rich and the poor there is a verse in which God encourages us to ask Him for wisdom. The powerful wisdom of God will see us through all troubles and deliver us from all temptations. 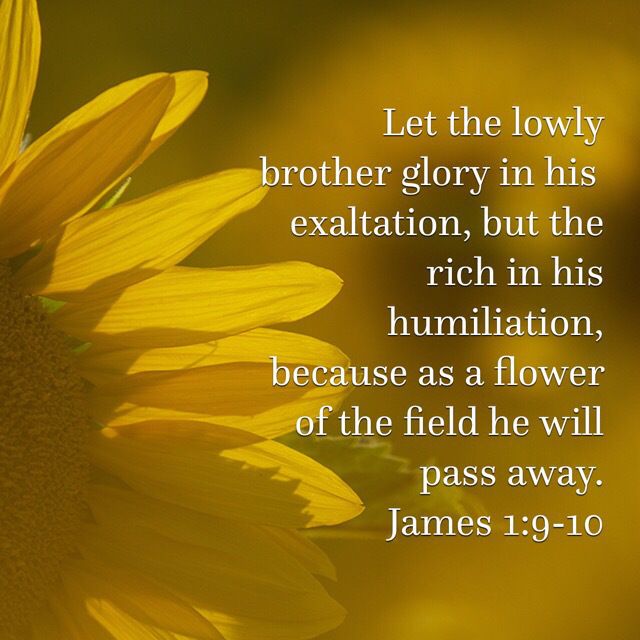 2 Dear brothers and sisters, when troubles of any kind come your way, consider it an opportunity for great joy. 3 For you know that when your faith is tested, your endurance has a chance to grow. 4 So let it grow, for when your endurance is fully developed, you will be perfect and complete, needing nothing.

5 If you need wisdom, ask our generous God, and he will give it to you. He will not rebuke you for asking. 6 But when you ask him, be sure that your faith is in God alone. Do not waver, for a person with divided loyalty is as unsettled as a wave of the sea that is blown and tossed by the wind. 7 Such people should not expect to receive anything from the Lord. 8 Their loyalty is divided between God and the world, and they are unstable in everything they do.

9 Believers who are poor have something to boast about, for God has honored them. 10 And those who are rich should boast that God has humbled them. They will fade away like a little flower in the field.11 The hot sun rises and the grass withers; the little flower droops and falls, and its beauty fades away. In the same way, the rich will fade away with all of their achievements.

12 God blesses those who patiently endure testing and temptation. Afterward they will receive the crown of life that God has promised to those who love him. 13 And remember, when you are being tempted, do not say, “God is tempting me.” God is never tempted to do wrong, and he never tempts anyone else.14 Temptation comes from our own desires, which entice us and drag us away. 15 These desires give birth to sinful actions. And when sin is allowed to grow, it gives birth to death.