I’m thankful to God and excited to learn from the Bible this morning something I’ve overlooked all through the years.

All through the decades of my Christian life, I’ve heard heard the name Melchizedek. But I didn’t realize the details that link him to Jesus. Melchizedek lived when Abraham lived. He was not in the lineage of the Levi family. He was before! He was a king and a priest. His name means king of Justice and king of peace. After winning a battle, Abraham tithed and gave to this king. The book of Hebrews says several times Jesus is a priest after the order of Melchizedek. And, Wow!, even David prophesied that Jesus was a priest like this man.

I give all those details to proclaim this amazing truth, even in the day of Abraham, when God was giving Abraham great and new promises, He had in mind that non-Jewish people like me could have a relationship with God! 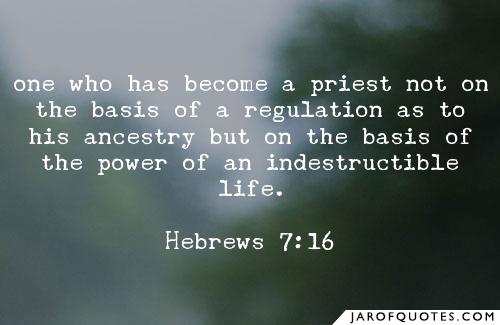 7 This Melchizedek was king of the city of Salem and also a priest of God Most High. When Abraham was returning home after winning a great battle against the kings, Melchizedek met him and blessed him. 2 Then Abraham took a tenth of all he had captured in battle and gave it to Melchizedek. The name Melchizedek means “king of justice,” and king of Salem means “king of peace.” 3 There is no record of his father or mother or any of his ancestors—no beginning or end to his life. He remains a priest forever, resembling the Son of God.

4 Consider then how great this Melchizedek was. Even Abraham, the great patriarch of Israel, recognized this by giving him a tenth of what he had taken in battle. 5 Now the law of Moses required that the priests, who are descendants of Levi, must collect a tithe from the rest of the people of Israel,[a] who are also descendants of Abraham. 6 But Melchizedek, who was not a descendant of Levi, collected a tenth from Abraham. And Melchizedek placed a blessing upon Abraham, the one who had already received the promises of God. 7 And without question, the person who has the power to give a blessing is greater than the one who is blessed.

11 So if the priesthood of Levi, on which the law was based, could have achieved the perfection God intended, why did God need to establish a different priesthood, with a priest in the order of Melchizedek instead of the order of Levi and Aaron?[b]

12 And if the priesthood is changed, the law must also be changed to permit it.13 For the priest we are talking about belongs to a different tribe, whose members have never served at the altar as priests. 14 What I mean is, our Lord came from the tribe of Judah, and Moses never mentioned priests coming from that tribe.

14 What I mean is, our Lord came from the tribe of Judah, and Moses never mentioned priests coming from that tribe.

15 This change has been made very clear since a different priest, who is like Melchizedek, has appeared. 16 Jesus became a priest, not by meeting the physical requirement of belonging to the tribe of Levi, but by the power of a life that cannot be destroyed. 17 And the psalmist pointed this out when he prophesied,