God’s people had been forced, against their will, to leave their homeland and live in Babylon. The prophet Jeremiah wrote a letter to them to give them encouragement from God Himself. No matter what the circumstances are, they may appear to be gloomy all around, cling to God and trust that He has a peacefully prosperous future for you. Thank Him for His greatness and goodness beforehand! 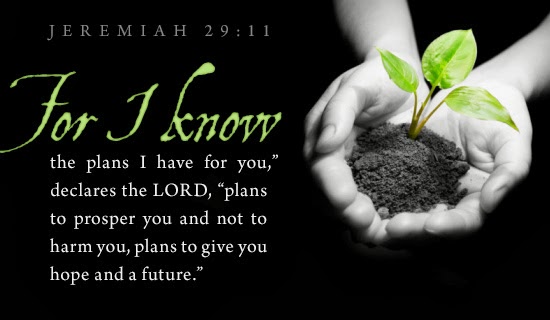 1 Jeremiah wrote a letter from Jerusalem to the elders, priests, prophets, and all the people who had been exiled to Babylon by King Nebuchadnezzar. 2 This was after King Jehoiachin,[a] the queen mother, the court officials, the other officials of Judah, and all the craftsmen and artisans had been deported from Jerusalem. 3 He sent the letter with Elasah son of Shaphan and Gemariah son of Hilkiah when they went to Babylon as King Zedekiah’s ambassadors to Nebuchadnezzar. This is what Jeremiah’s letter said:

4 This is what the Lord of Heaven’s Armies, the God of Israel, says to all the captives he has exiled to Babylon from Jerusalem: 5 “Build homes, and plan to stay. Plant gardens, and eat the food they produce. 6 Marry and have children. Then find spouses for them so that you may have many grandchildren. Multiply! Do not dwindle away! 7 And work for the peace and prosperity of the city where I sent you into exile. Pray to the Lord for it, for its welfare will determine your welfare.”

8 This is what the Lord of Heaven’s Armies, the God of Israel, says: “Do not let your prophets and fortune-tellers who are with you in the land of Babylon trick you. Do not listen to their dreams, 9 because they are telling you lies in my name. I have not sent them,” says the Lord.

10 This is what the Lord says: “You will be in Babylon for seventy years. But then I will come and do for you all the good things I have promised, and I will bring you home again.11 For I know the plans I have for you,” says the Lord. “They are plans for good and not for disaster, to give you a future and a hope. 12 In those days when you pray, I will listen. 13 If you look for me wholeheartedly, you will find me. 14 I will be found by you,” says the Lord. “I will end your captivity and restore your fortunes. I will gather you out of the nations where I sent you and will bring you home again to your own land.”