God uses foolishness of this life to confound  the wisest people. He wants to get their attention and bring them to the truth of His unending love for them. 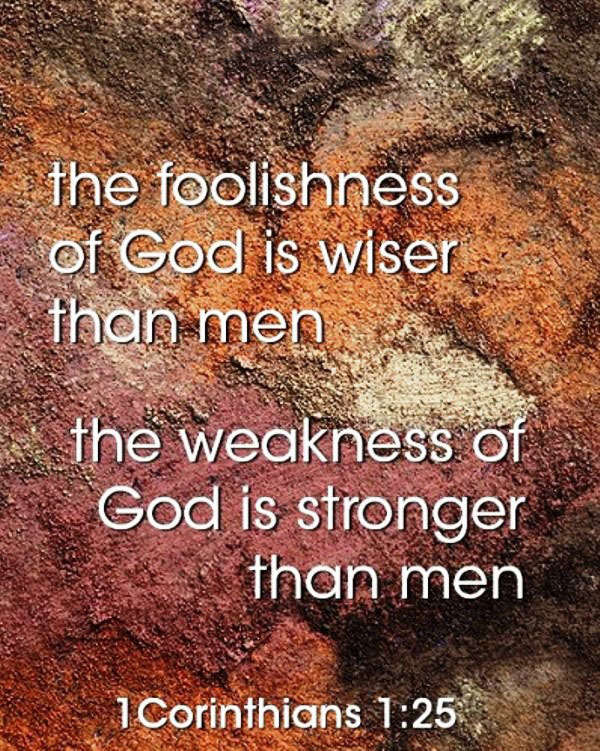 18 The message of the cross is foolish to those who are headed for destruction! But we who are being saved know it is the very power of God.19 As the Scriptures say,

20 So where does this leave the philosophers, the scholars, and the world’s brilliant debaters? God has made the wisdom of this world look foolish. 21 Since God in his wisdom saw to it that the world would never know him through human wisdom, he has used our foolish preaching to save those who believe. 22 It is foolish to the Jews, who ask for signs from heaven. And it is foolish to the Greeks, who seek human wisdom. 23 So when we preach that Christ was crucified, the Jews are offended and the Gentiles say it’s all nonsense.

24 But to those called by God to salvation, both Jews and Gentiles, Christ is the power of God and the wisdom of God. 25 This foolish plan of God is wiser than the wisest of human plans, and God’s weakness is stronger than the greatest of human strength.

26 Remember, dear brothers and sisters, that few of you were wise in the world’s eyes or powerful or wealthy when God called you. 27 Instead, God chose things the world considers foolish in order to shame those who think they are wise. And he chose things that are powerless to shame those who are powerful. 28 God chose things despised by the world, things counted as nothing at all, and used them to bring to nothing what the world considers important. 29 As a result, no one can ever boast in the presence of God.

30 God has united you with Christ Jesus. For our benefit God made him to be wisdom itself. Christ made us right with God; he made us pure and holy, and he freed us from sin.31 Therefore, as the Scriptures say, “If you want to boast, boast only about the Lord.”