God warned His people because of their rebellion difficult times were coming. When Zedekiah was king, King Nebuchadnezzar of Babylon burned down the city of Jerusalem and took the people captive. 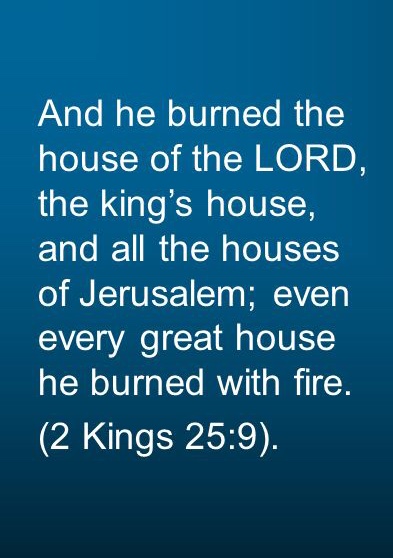 8 On August 14 of that year, which was the nineteenth year of King Nebuchadnezzar’s reign, Nebuzaradan, the captain of the guard and an official of the Babylonian king, arrived in Jerusalem. 9 He burned down the Temple of the Lord, the royal palace, and all the houses of Jerusalem. He destroyed all the important buildings[b]in the city. 10 Then he supervised the entire Babylonian army as they tore down the walls of Jerusalem on every side. 11 Then Nebuzaradan, the captain of the guard, took as exiles the rest of the people who remained in the city, the defectors who had declared their allegiance to the king of Babylon, and the rest of the population. 12 But the captain of the guard allowed some of the poorest people to stay behind to care for the vineyards and fields.

13 The Babylonians broke up the bronze pillars in front of the Lord’s Temple, the bronze water carts, and the great bronze basin called the Sea, and they carried all the bronze away to Babylon.14 They also took all the ash buckets, shovels, lamp snuffers, ladles, and all the other bronze articles used for making sacrifices at the Temple. 15 The captain of the guard also took the incense burners and basins, and all the other articles made of pure gold or silver.

16 The weight of the bronze from the two pillars, the Sea, and the water carts was too great to be measured. These things had been made for the Lord’s Temple in the days of Solomon. 17 Each of the pillars was 27 feet[c] tall. The bronze capital on top of each pillar was 7 1⁄2 feet[d] high and was decorated with a network of bronze pomegranates all the way around.

18 Nebuzaradan, the captain of the guard, took with him as prisoners Seraiah the high priest, Zephaniah the priest of the second rank, and the three chief gatekeepers. 19 And from among the people still hiding in the city, he took an officer who had been in charge of the Judean army; five of the king’s personal advisers; the army commander’s chief secretary, who was in charge of recruitment; and sixty other citizens. 20 Nebuzaradan, the captain of the guard, took them all to the king of Babylon at Riblah. 21 And there at Riblah, in the land of Hamath, the king of Babylon had them all put to death. So the people of Judah were sent into exile from their land.