It was an interesting conversation the first time Paul met the apostles and had to convince them he was on there side. 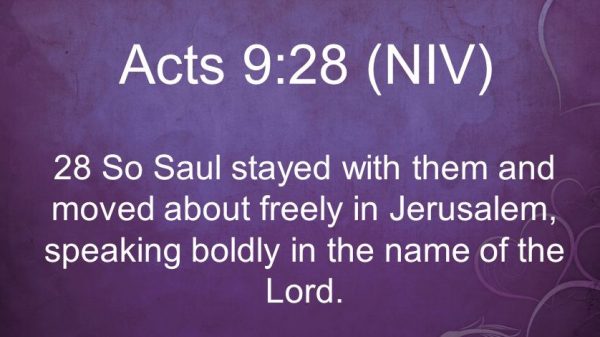 26 When Saul arrived in Jerusalem, he tried to meet with the believers, but they were all afraid of him. They did not believe he had truly become a believer! 27 Then Barnabas brought him to the apostles and told them how Saul had seen the Lord on the way to Damascus and how the Lord had spoken to Saul. He also told them that Saul had preached boldly in the name of Jesus in Damascus.

28 So Saul stayed with the apostles and went all around Jerusalem with them, preaching boldly in the name of the Lord. 29 He debated with some Greek-speaking Jews, but they tried to murder him. 30 When the believers[a] heard about this, they took him down to Caesarea and sent him away to Tarsus, his hometown.

31 The church then had peace throughout Judea, Galilee, and Samaria, and it became stronger as the believers lived in the fear of the Lord. And with the encouragement of the Holy Spirit, it also grew in numbers.