Jesus entered Jerusalem riding on a donkey. He would soon be crucified. The people called Him king. Many of them had saw how He raised Lazarus from the dead.

In some of the Bible translations the word hosanna is used. I use the New Living Translation so it uses the phrase praise God in verse 12. This is its definition:

(especially in biblical, Judaic, and Christian use) used to express adoration, praise, or joy. 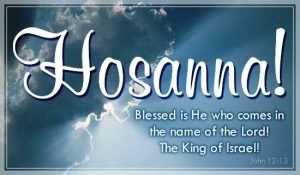 12 The next day, the news that Jesus was on the way to Jerusalem swept through the city. A large crowd of Passover visitors 13 took palm branches and went down the road to meet him. They shouted,

“Praise God!
Blessings on the one who comes in the name of the Lord!
Hail to the King of Israel!”
14 Jesus found a young donkey and rode on it, fulfilling the prophecy that said:

15 “Don’t be afraid, people of Jerusalem.
Look, your King is coming,
riding on a donkey’s colt.”
16 His disciples didn’t understand at the time that this was a fulfillment of prophecy. But after Jesus entered into his glory, they remembered what had happened and realized that these things had been written about him.

17 Many in the crowd had seen Jesus call Lazarus from the tomb, raising him from the dead, and they were telling others about it. 18 That was the reason so many went out to meet him—because they had heard about this miraculous sign. 19 Then the Pharisees said to each other, “There’s nothing we can do. Look, everyone has gone after him!”