If you’re at sea and a major storm you quickly realize God’s powerful hand. But as quickly as you acknowledge His power you can cry out for His help and in a microsecond He hears your cry. 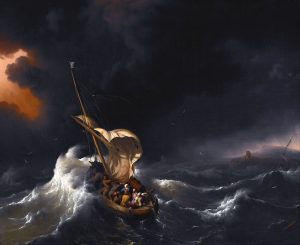 Christ in the Storm on the Sea of Galilee
Ludolf Backhuyse

Some went off to sea in ships,
plying the trade routes of the world.
24 They, too, observed the Lord’s power in action,
his impressive works on the deepest seas.
25 He spoke, and the winds rose,
stirring up the waves.
26 Their ships were tossed to the heavens
and plunged again to the depths;
the sailors cringed in terror.
27 They reeled and staggered like drunkards
and were at their wits’ end.
28 “Lord, help!” they cried in their trouble,
and he saved them from their distress.
29 He calmed the storm to a whisper
and stilled the waves.
30 What a blessing was that stillness
as he brought them safely into harbor!
31 Let them praise the Lord for his great love
and for the wonderful things he has done for them.
32 Let them exalt him publicly before the congregation
and before the leaders of the nation.