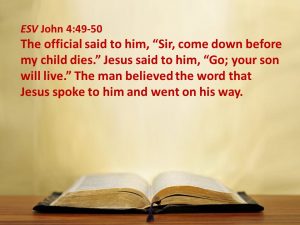 46 As he traveled through Galilee, he came to Cana, where he had turned the water into wine. There was a government official in nearby Capernaum whose son was very sick. 47 When he heard that Jesus had come from Judea to Galilee, he went and begged Jesus to come to Capernaum to heal his son, who was about to die.

48 Jesus asked, “Will you never believe in me unless you see miraculous signs and wonders?”

50 Then Jesus told him, “Go back home. Your son will live!” And the man believed what Jesus said and started home.

51 While the man was on his way, some of his servants met him with the news that his son was alive and well. 52 He asked them when the boy had begun to get better, and they replied, “Yesterday afternoon at one o’clock his fever suddenly disappeared!” 53 Then the father realized that that was the very time Jesus had told him, “Your son will live.” And he and his entire household believed in Jesus. 54 This was the second miraculous sign Jesus did in Galilee after coming from Judea.