The disciples of John the Baptist asked him who Jesus was. 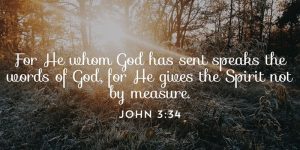 26 So John’s disciples came to him and said, “Rabbi, the man you met on the other side of the Jordan River, the one you identified as the Messiah, is also baptizing people. And everybody is going to him instead of coming to us.”

27 John replied, “No one can receive anything unless God gives it from heaven. 28 You yourselves know how plainly I told you, ‘I am not the Messiah. I am only here to prepare the way for him.’ 29 It is the bridegroom who marries the bride, and the bridegroom’s friend is simply glad to stand with him and hear his vows. Therefore, I am filled with joy at his success. 30 He must become greater and greater, and I must become less and less.

31 “He has come from above and is greater than anyone else. We are of the earth, and we speak of earthly things, but he has come from heaven and is greater than anyone else.[a] 32 He testifies about what he has seen and heard, but how few believe what he tells them! 33 Anyone who accepts his testimony can affirm that God is true. 34 For he is sent by God. He speaks God’s words, for God gives him the Spirit without limit. 35 The Father loves his Son and has put everything into his hands. 36 And anyone who believes in God’s Son has eternal life. Anyone who doesn’t obey the Son will never experience eternal life but remains under God’s angry judgment.”