God’s love for humanity is non-condemning. He sent His only son to to be the way to be saved from a death that lasts for eternity. 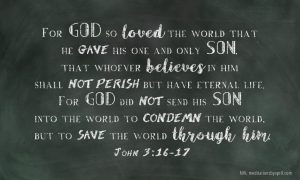 16 “For this is how God loved the world: He gave his one and only Son, so that everyone who believes in him will not perish but have eternal life. 17 God sent his Son into the world not to judge the world, but to save the world through him.

18 “There is no judgment against anyone who believes in him. But anyone who does not believe in him has already been judged for not believing in God’s one and only Son. 19 And the judgment is based on this fact: God’s light came into the world, but people loved the darkness more than the light, for their actions were evil. 20 All who do evil hate the light and refuse to go near it for fear their sins will be exposed. 21 But those who do what is right come to the light so others can see that they are doing what God wants.