Moses was 120 years old and would die soon. He handed over his leadership role to Joshua. 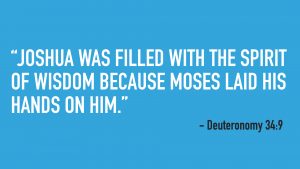 4 Then the Lord said to Moses, “This is the land I promised on oath to Abraham, Isaac, and Jacob when I said, ‘I will give it to your descendants.’ I have now allowed you to see it with your own eyes, but you will not enter the land.”

5 So Moses, the servant of the Lord, died there in the land of Moab, just as the Lord had said. 6 The Lord buried him in a valley near Beth-peor in Moab, but to this day no one knows the exact place. 7 Moses was 120 years old when he died, yet his eyesight was clear, and he was as strong as ever. 8 The people of Israel mourned for Moses on the plains of Moab for thirty days, until the customary period of mourning was over.

9 Now Joshua son of Nun was full of the spirit of wisdom, for Moses had laid his hands on him. So the people of Israel obeyed him, doing just as the Lord had commanded Moses.

10 There has never been another prophet in Israel like Moses, whom the Lord knew face to face. 11 The Lord sent him to perform all the miraculous signs and wonders in the land of Egypt against Pharaoh, and all his servants, and his entire land. 12 With mighty power, Moses performed terrifying acts in the sight of all Israel.