Israel is undeniably blessed by God. Balaam, a once false prophet, could not curse Israel. The Spirit of God spoke through Balaam and he humbly yielded. His actions infuriated King Balak, the ruler of Moab. 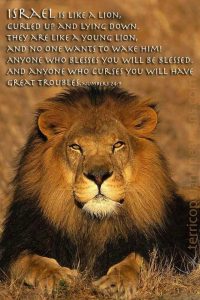 24 By now Balaam realized that the Lord was determined to bless Israel, so he did not resort to divination as before. Instead, he turned and looked out toward the wilderness, 2 where he saw the people of Israel camped, tribe by tribe. Then the Spirit of God came upon him, 3 and this is the message he delivered:

“This is the message of Balaam son of Beor,
the message of the man whose eyes see clearly,
4 the message of one who hears the words of God,
who sees a vision from the Almighty,
who bows down with eyes wide open:
5 How beautiful are your tents, O Jacob;
how lovely are your homes, O Israel!
6 They spread before me like palm groves,
like gardens by the riverside.
They are like tall trees planted by the Lord,
like cedars beside the waters.
7 Water will flow from their buckets;
their offspring have all they need.
Their king will be greater than Agag;
their kingdom will be exalted.
8 God brought them out of Egypt;
for them he is as strong as a wild ox.
He devours all the nations that oppose him,
breaking their bones in pieces,
shooting them with arrows.
9 Like a lion, Israel crouches and lies down;
like a lioness, who dares to arouse her?
Blessed is everyone who blesses you, O Israel,
and cursed is everyone who curses you.”
10 King Balak flew into a rage against Balaam. He angrily clapped his hands and shouted, “I called you to curse my enemies! Instead, you have blessed them three times. 11 Now get out of here! Go back home! I promised to reward you richly, but the Lord has kept you from your reward.”

12 Balaam told Balak, “Don’t you remember what I told your messengers? I said, 13 ‘Even if Balak were to give me his palace filled with silver and gold, I would be powerless to do anything against the will of the Lord.’ I told you that I could say only what the Lord says! 14 Now I am returning to my own people. But first let me tell you what the Israelites will do to your people in the future.”

Balaam’s Final Messages
15 This is the message Balaam delivered:

“This is the message of Balaam son of Beor,
the message of the man whose eyes see clearly,
16 the message of one who hears the words of God,
who has knowledge from the Most High,
who sees a vision from the Almighty,
who bows down with eyes wide open:
17 I see him, but not here and now.
I perceive him, but far in the distant future.
A star will rise from Jacob;
a scepter will emerge from Israel.
It will crush the heads of Moab’s people,
cracking the skulls of the people of Sheth.
18 Edom will be taken over,
and Seir, its enemy, will be conquered,
while Israel marches on in triumph.
19 A ruler will rise in Jacob
who will destroy the survivors of Ir.”
20 Then Balaam looked over toward the people of Amalek and delivered this message:

“Amalek was the greatest of nations,
but its destiny is destruction!”
21 Then he looked over toward the Kenites and delivered this message:

“Your home is secure;
your nest is set in the rocks.
22 But the Kenites will be destroyed
when Assyria[c] takes you captive.”
23 Balaam concluded his messages by saying:

“Alas, who can survive
unless God has willed it?
24 Ships will come from the coasts of Cyprus[d];
they will oppress Assyria and afflict Eber,
but they, too, will be utterly destroyed.”