Zechariah and Elizabeth had a baby in their old age. Everyone thought they would name him after his dad. But an angel said to name him John (Luke 1:12-13) so they did. People were amazed as they observed the beginning of John’s life. 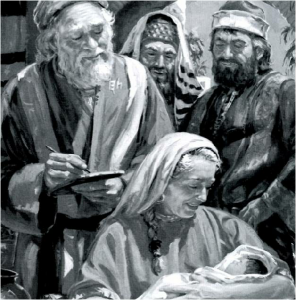 57 When it was time for Elizabeth’s baby to be born, she gave birth to a son. 58 And when her neighbors and relatives heard that the Lord had been very merciful to her, everyone rejoiced with her.

59 When the baby was eight days old, they all came for the circumcision ceremony. They wanted to name him Zechariah, after his father. 60 But Elizabeth said, “No! His name is John!”

61 “What?” they exclaimed. “There is no one in all your family by that name.” 62 So they used gestures to ask the baby’s father what he wanted to name him. 63 He motioned for a writing tablet, and to everyone’s surprise he wrote, “His name is John.” 64 Instantly Zechariah could speak again, and he began praising God.

65 Awe fell upon the whole neighborhood, and the news of what had happened spread throughout the Judean hills. 66 Everyone who heard about it reflected on these events and asked, “What will this child turn out to be?” For the hand of the Lord was surely upon him in a special way.