The angel Gabriel visited Zechariah while he was in the temple. He told Zechariah he would have a child in his old age. This child was John the Baptist who paved the way for Jesus. 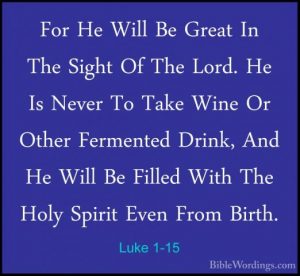 11 While Zechariah was in the sanctuary, an angel of the Lord appeared to him, standing to the right of the incense altar. 12 Zechariah was shaken and overwhelmed with fear when he saw him. 13 But the angel said, “Don’t be afraid, Zechariah! God has heard your prayer. Your wife, Elizabeth, will give you a son, and you are to name him John. 14 You will have great joy and gladness, and many will rejoice at his birth, 15 for he will be great in the eyes of the Lord. He must never touch wine or other alcoholic drinks. He will be filled with the Holy Spirit, even before his birth. 16 And he will turn many Israelites to the Lord their God. 17 He will be a man with the spirit and power of Elijah. He will prepare the people for the coming of the Lord. He will turn the hearts of the fathers to their children, and he will cause those who are rebellious to accept the wisdom of the godly.”

18 Zechariah said to the angel, “How can I be sure this will happen? I’m an old man now, and my wife is also well along in years.”

19 Then the angel said, “I am Gabriel! I stand in the very presence of God. It was he who sent me to bring you this good news! 20 But now, since you didn’t believe what I said, you will be silent and unable to speak until the child is born. For my words will certainly be fulfilled at the proper time.”

21 Meanwhile, the people were waiting for Zechariah to come out of the sanctuary, wondering why he was taking so long. 22 When he finally did come out, he couldn’t speak to them. Then they realized from his gestures and his silence that he must have seen a vision in the sanctuary.

23 When Zechariah’s week of service in the Temple was over, he returned home. 24 Soon afterward his wife, Elizabeth, became pregnant and went into seclusion for five months. 25 “How kind the Lord is!” she exclaimed. “He has taken away my disgrace of having no children.”