Easter is coming soon. It’s interesting to me recount the crucifixion of Jesus. It was the most important deed accomplished in the history of mankind.

There are three instances when the event was unfolding that stand out. All of these are relational.

1)The crowd of Jews rejected Jesus and screamed out that He should be killed.

2)God temporarily forsook Jesus at the point when He took on the sin of all humanity. Jesus was all alone. On earth, humans are never fully alone. We always have God.

3)The Roman soldier ( not a follower of Christ) proclaimed that Jesus was truly God’s Son. 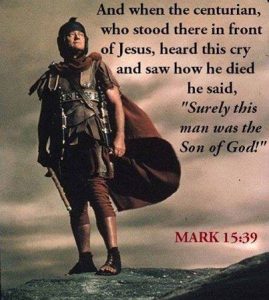 6 Now it was the governor’s custom each year during the Passover celebration to release one prisoner—anyone the people requested. 7 One of the prisoners at that time was Barabbas, a revolutionary who had committed murder in an uprising. 8 The crowd went to Pilate and asked him to release a prisoner as usual.

14 “Why?” Pilate demanded. “What crime has he committed?”

But the mob roared even louder, “Crucify him!”

15 So to pacify the crowd, Pilate released Barabbas to them. He ordered Jesus flogged with a lead-tipped whip, then turned him over to the Roman soldiers to be crucified.

The Soldiers Mock Jesus
16 The soldiers took Jesus into the courtyard of the governor’s headquarters (called the Praetorium) and called out the entire regiment. 17 They dressed him in a purple robe, and they wove thorn branches into a crown and put it on his head. 18 Then they saluted him and taunted, “Hail! King of the Jews!” 19 And they struck him on the head with a reed stick, spit on him, and dropped to their knees in mock worship. 20 When they were finally tired of mocking him, they took off the purple robe and put his own clothes on him again. Then they led him away to be crucified.

The Crucifixion
21 A passerby named Simon, who was from Cyrene,[a] was coming in from the countryside just then, and the soldiers forced him to carry Jesus’ cross. (Simon was the father of Alexander and Rufus.) 22 And they brought Jesus to a place called Golgotha (which means “Place of the Skull”). 23 They offered him wine drugged with myrrh, but he refused it.

24 Then the soldiers nailed him to the cross. They divided his clothes and threw dice[b] to decide who would get each piece. 25 It was nine o’clock in the morning when they crucified him. 26 A sign announced the charge against him. It read, “The King of the Jews.” 27 Two revolutionaries[c] were crucified with him, one on his right and one on his left.

29 The people passing by shouted abuse, shaking their heads in mockery. “Ha! Look at you now!” they yelled at him. “You said you were going to destroy the Temple and rebuild it in three days. 30 Well then, save yourself and come down from the cross!”

31 The leading priests and teachers of religious law also mocked Jesus. “He saved others,” they scoffed, “but he can’t save himself! 32 Let this Messiah, this King of Israel, come down from the cross so we can see it and believe him!” Even the men who were crucified with Jesus ridiculed him.

The Death of Jesus
33 At noon, darkness fell across the whole land until three o’clock. 34 Then at three o’clock Jesus called out with a loud voice, “Eloi, Eloi, lema sabachthani?” which means “My God, my God, why have you abandoned me?”

35 Some of the bystanders misunderstood and thought he was calling for the prophet Elijah. 36 One of them ran and filled a sponge with sour wine, holding it up to him on a reed stick so he could drink. “Wait!” he said. “Let’s see whether Elijah comes to take him down!”

37 Then Jesus uttered another loud cry and breathed his last. 38 And the curtain in the sanctuary of the Temple was torn in two, from top to bottom.

39 When the Roman officer who stood facing him[g] saw how he had died, he exclaimed, “This man truly was the Son of God!”