Jesus was entering the town of Jerusalem where He would suffer on the cross and then conquer death and Hell. People were praising Him as king. The religious leaders wanted them to stop. Jesus told them the rocks would cry out if the people were silent. Jesus will be praised because He is the Ruler of all creation. 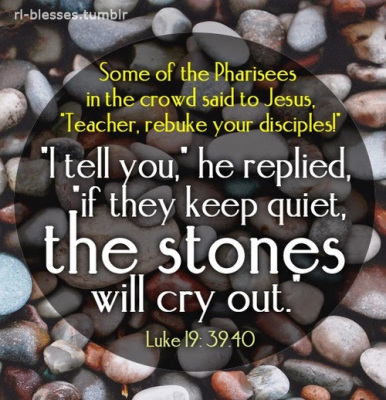 36 As he rode along, the crowds spread out their garments on the road ahead of him. 37 When he reached the place where the road started down the Mount of Olives, all of his followers began to shout and sing as they walked along, praising God for all the wonderful miracles they had seen.

38 “Blessings on the King who comes in the name of the Lord!
Peace in heaven, and glory in highest heaven!”[a]

39 But some of the Pharisees among the crowd said, “Teacher, rebuke your followers for saying things like that!”

40 He replied, “If they kept quiet, the stones along the road would burst into cheers!”