Sometimes people talk about having to go through Hell on earth. There is a true Hell and it lasts forever. If someone in Hell could express their opinion to earth dwellers what would they say? Since God’s love toward every human is also endless, there is a story that His Son, Jesus, told to cause people to want to avoid Hell at all costs.

There was a beggar named Lazarus, who was infested with sores and so impoverished that he longed to eat the scraps of a rich man that were given to the dogs. The rich man dwelt in all the luxury life could give. But then, on an appointed day, God demanded that the rich man and the poor man’s life on earth come to an end. 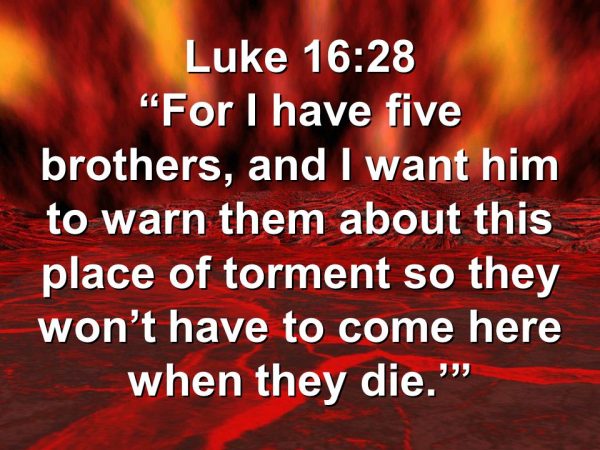 19 Jesus said, “There was a certain rich man who was splendidly clothed in purple and fine linen and who lived each day in luxury. 20 At his gate lay a poor man named Lazarus who was covered with sores. 21 As Lazarus lay there longing for scraps from the rich man’s table, the dogs would come and lick his open sores.

22 “Finally, the poor man died and was carried by the angels to sit beside Abraham at the heavenly banquet.[a]The rich man also died and was buried,23 and he went to the place of the dead.[b] There, in torment, he saw Abraham in the far distance with Lazarus at his side.

24 “The rich man shouted, ‘Father Abraham, have some pity! Send Lazarus over here to dip the tip of his finger in water and cool my tongue. I am in anguish in these flames.’

25 “But Abraham said to him, ‘Son, remember that during your lifetime you had everything you wanted, and Lazarus had nothing. So now he is here being comforted, and you are in anguish. 26 And besides, there is a great chasm separating us. No one can cross over to you from here, and no one can cross over to us from there.’

27 “Then the rich man said, ‘Please, Father Abraham, at least send him to my father’s home. 28 For I have five brothers, and I want him to warn them so they don’t end up in this place of torment.’

29 “But Abraham said, ‘Moses and the prophets have warned them. Your brothers can read what they wrote.’

30 “The rich man replied, ‘No, Father Abraham! But if someone is sent to them from the dead, then they will repent of their sins and turn to God.’

31 “But Abraham said, ‘If they won’t listen to Moses and the prophets, they won’t be persuaded even if someone rises from the dead.’”